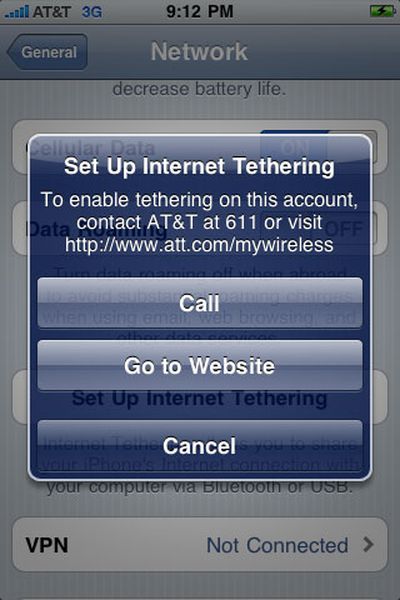 One item spotted in the latest iPhone 4.0 Beta is a new configuration page for Internet Tethering. The page alerts AT&T customers that in order to set up internet tethering, you need to contact AT&T at 611 or visit AT&T's website. The new message seems to indicate that AT&T may finally be ready to deliver tethering to U.S. customers.

Internet tethering was a feature introduced in iPhone OS 3.0 and is supported by many international carriers. It allows users to share their iPhone's 3G internet connection to other devices such as their laptops over Bluetooth or USB. AT&T, however, has been slow to roll out the feature to its customers due to concerns about increasing strain on their networks. iPhone 4.0 is due for public release this summer.