iFixit confirms that the processor revealed in the leaked 4th generation iPhone is an Apple A4 processor. iFixit was also able to confirm the Samsung DRAM part number indicating that the next generation iPhone will have 256MB of RAM. This is the same amount of RAM found in the iPhone 3GS and iPad. 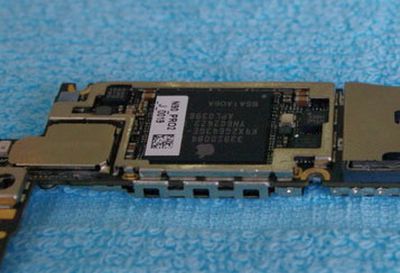 The new device was also labeled as "N90 PRO2". N90 is the product id number for the next generation iPhone, though we aren't certain what "PRO2" means. The Gizmodo prototype phone was labeled DVT which is said to stand for "design verification test". We can only speculate at this point that PRO could stand for prototype or production.

Here are translated impressions by forum reader lincolntran of the Tinte post originally written in Vietnamese:

iPhone 4G has a totally new design in comparing with previous generations of iPhone. Not only looking stronger (aluminum and glass) when holding in your hand, you will be surprise to think that it was put together by several separate parts because it feels like a solid block. Because of the square/block design, it feels a little uncomfortable in your hand in comparing with the previous generation of iPhone. You can feel the sharp edges come in contact with your hand.

There is no longer a metal bezel on the front, only a black surface. The back design is also the same, a single piece of glass convering all the Logo, camera, flash, and other information...look very classy. We can see that the front and back are pieces of glass that were attached to the aluminum frame. When looking at another angel, people will see that aluminum frame was brilliantly made; a lot of attention to the details, thing like speakers, earphone, mic.... Beside the only home button in the front, there is another small camera right on the left of the speaker, under the glass surface.

The 4 edges contain the same buttons with the same functions as the previous iPhones. The volume buttons are now separate and are round. Next to the headphone plug and power button, there a small hole, which looks like a mic's hole. It's possible that this is the noice canceling mic. The SIM card has been moved to the right side, like on the iPad.

Dimension: iPhone 4G is thinner than the previous iPhones (about 2.5mm), the width is also narrower, about 3.5mm (this is because of the aluminum frame), the height is about 1mm higher. These changes have made the new iPhone looks longer or higher.

When turning on the iPhone, only the inferno screen is showed and some information that look like command lines. Perhap this screen showed up not because of Apple remotely locked the machine but the phone is locked locally after a time interval without the user entering a certain code.