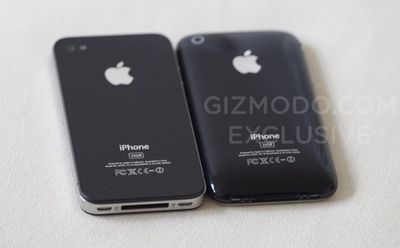 Since the leak of a next-generation iPhone earlier this week, questions have been raised about how closely the device in question matches what ends up being the final shipping product, expected to be launched later this year. Apple undoubtedly creates a number of prototypes of its products as it seeks to settle on designs that will achieve its technical and aesthetic goals, and while one might expect that Apple would wait until a nearly-final design had been reached before sending Apple employees out into the wild with the devices, time constraints and other issues could result in Apple sending out devices for performance testing while continuing to redesign other aspects.

In a lengthy post analyzing the circumstances of the lost iPhone, Daring Fireball's John Gruber notes that it appears that the device closely resembles, if not matches, the final design for the public launch.

According to Gizmodo, one of the barcodes attached to the unit read "N90_DVT_GE4X_0493". According to several sources (of mine) familiar with the project, "N90" is Apple's codename for the fourth-generation GSM iPhone, slated for release this June or July. "DVT" stands for "design verification test", an Apple production milestone. The DVT milestone is very late in the game; based on this, I now believe that this unit very closely, if not exactly, resembles what Apple plans to release.

Gruber's thoughts echo those of iFixit CEO Kyle Wiens, who noted earlier this week that the device appeared to be close to the final shipping version.

It's closer to production than I was expecting. I'd say this thing is very very close.

While the evidence does not preclude Apple from making last-minute feature or design changes to the next-generation iPhone, it does indicate that Apple believes it has essentially a final design in hand.