Steve Jobs Weighs in on iPad International Pricing and Taxes 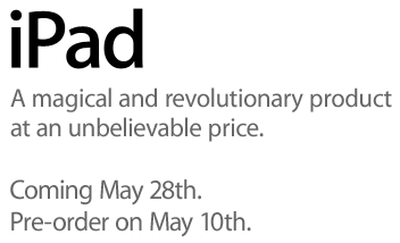 With Apple's announcement on Friday regarding availability of the iPad in nine new countries later this month, a number of potential customers expressed dismay at the apparent higher prices in those countries relative to those in the United States. Several of those customers took the time to email Apple CEO Steve Jobs with complaints on the issue, two of whom shared his identical responses with us.

Please educate yourself. UK prices must by law include VAT, which is around 18%. US prices do not include tax.

The standard VAT rate in the UK is 17.5%, meaning that the 429 base price for the 16 GB Wi-Fi iPad in the UK is actually only 365 in "pre-tax" pricing. At current exchange rates, this corresponds to approximately $540 in the United States, or an approximately $40 premium for U.K. customers. While the price difference is not insignificant, it is considerably smaller than it might appear at first glance.

Apple has long offered somewhat higher international pricing on his products than it does in the United States, even accounting for difference in taxation practices. These differences are possibly due to increased overhead for distribution and "cost of business" in other countries, as well as the need to account for foreign exchange rates that can fluctuate over time.

Meanwhile, users in Germany have discovered that their iPad prices are higher than in other European countries, even when accounting for tax differences. At least one reader also emailed Jobs about this issue and reported to fscklog that he noted a special copyright tax imposed by the government there.

The report notes that iPad prices in Germany are about 15 euros higher than those in France and Italy, with the extra copyright tax being applied due to the iPad's classification as a "PC without burner".