A pair of interesting patent applications from Apple were published today by the U.S. Patent and Trademark Office revealing concepts Apple engineers have been tossing around as they work to develop features for future products. 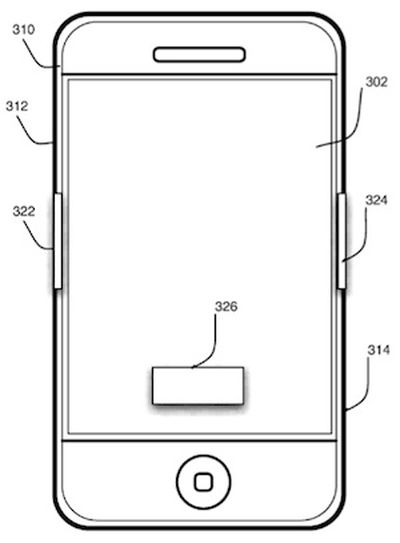 iPhone with various cardiac activity monitor leads (322, 324, 326)
Unwired View points to an application entitled "Seamlessly Embedded Heart Rate Monitor", and while some might assume that Apple is looking to build new Nike+ capabilities into its mobile devices, the company's focus on this technology actually appears to be related to biometric identification of users.

To determine the user's heart rate, heartbeat, or other cardiac signals, the electronic device can include one or more sensors embedded in the device. The one or more sensors can include leads for receiving electrical signals from the user's heart. . . . To provide an electrical signal from the user to the processing circuitry, the leads can be exposed such that the user may directly contact the leads, or may instead or in addition be coupled to an electrically conductive portion of the device enclosure (e.g., a metallic bezel or housing forming the exterior of the device).

In particular, Apple envisions the use of heartbeat signals either for authenticating a user for access to the device's content or for identifying the user and loading a customized profile utilizing their preset preferences for the device.

As an example, Apple describes a stock ticker widget where a user can define each side of a three-dimensional widget to contain detailed financial information on a single stock. The widget could adapt in shape to the number of entries made by the user, expanding or contracting based on additions or subtractions.

Apple also describes a "widget receptacle", where multiple 3D widgets could be grouped together based on certain criteria and represented on a single larger 3D surface. Upon activation of one of the faces of the receptacle, the corresponding widget would be instantiated on its own.

Representation of a widget receptacle housing multiple widgets
Apple has explored other virtual multidimensional interface environments in previous patent applications, including on an iPhone-like mobile device and in a 3D desktop similar to that used by BumpTop, which was recently acquired by Google.
Related Forum: iPhone
[ 32 comments ]

Thursday September 29, 2022 12:38 pm PDT by Juli Clover
Tony Blevins, Apple's vice president of procurement, is set to depart the company after he made a crude comment about his profession in a recent TikTok video, reports Bloomberg. Blevins was in a video by TikTok creator Daniel Mac, who was doing a series on the jobs of people he spotted with expensive cars. After seeing Blevins in an expensive Mercedes-Benz SLR McLaren, Mac asked Blevins what ...
Read Full Article • 667 comments