Dozens of Apple patent applications were published today revealing research that Apple had done in 2007 on many topics encompassing future versions of Mac OS X. The most intriguing is a series of patent applications which describe a "Multidimensional" user interface. Apple has essentially been working on true 3D desktop environments.

In one titled Multidimensional Desktop, Apple includes a number of diagrams depicting what such a desktop might look like and how it would work. 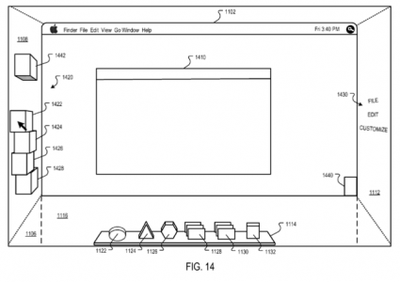 This figure (above) shows that windows could be dragged or displaced across multiple surfaces. Each surface could have its own characteristics and cause icons or windows to display different information:

It's not clear when and if Apple will decide to implement these design ideas into a future version of Mac OS X. Apple's next major version of Mac OS X (10.6) is due in the first quarter of 2009 and will primarily focus on "under the hood" changes to boost performance. Apple has not been the only one working on 3D desktops. One popular YouTube video demos a 3D desktop in action. Sun's Project Looking Glass also demonstrates a currently functional 3D desktop for linux and Solaris x86.
[ 139 comments ]