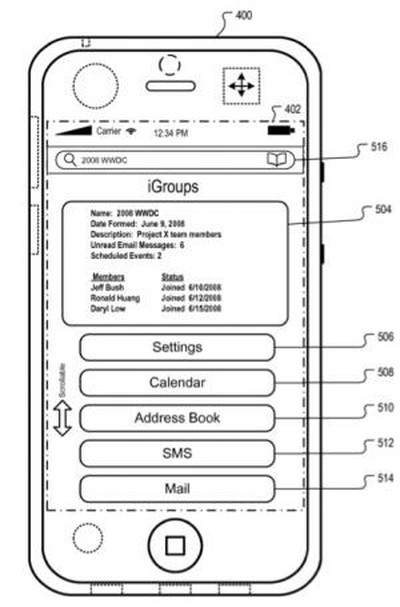 Patently Apple points to a patent application from Apple published today addressing technology to allow users at large events such as concerts, tradeshows, and rallies to utilize their mobile devices to automatically create social networking groups by exchanging "tokens" using such wireless technologies as Bluetooth and Wi-Fi.

The patent application, which was filed in September 2008, describes an example of the technology involving Apple's Worldwide Developers Conference, specifically using an "iGroups" application on the iPhone to demonstrate the process by which attendees could invite one another to a group and access information related to group discussion and activities on their devices.

A similar example shows how concert attendees could set their mobile devices to participate in the formation of a group at the event.

Groups created using the method could then utilize functionalities such as e-mail and calendaring applications to interact with each other. The specific "rock concert" example poses a situation in which the musicians on-stage could initiate a group, linking to attendees near the front of the audience. The technology could also "daisy chain" to allow those further back in the crowd to still join the group via attendees further forward even if out of range of the musicians.

Thursday May 13, 2021 12:10 am PDT by Sami Fathi
Apple has fired Antonio García Martínez, an ex-Facebook product manager and author of the controversial book "Chaos Monkeys," following public and internal calls for removal and investigation due to past misogynistic statements, The Verge reports. Apple hired Martínez earlier this week to join its ads team, however, comments that Martínez made in the past sparked condemnation from users...
Read Full Article • 332 comments

Friday May 14, 2021 11:52 am PDT by Juli Clover
Following the discontinuation of the iMac Pro, Apple also appears to be discontinuing Space Gray "Magic" accessories that it sold separately alongside the iMac Pro. The iMac Pro was the only Space Gray Mac, and Apple designed special matching accessories for it. The Space Gray Magic Mouse 2, Magic Keyboard, and Magic Trackpad all now say "While supplies last" in small wording at the bottom...
Read Full Article • 330 comments