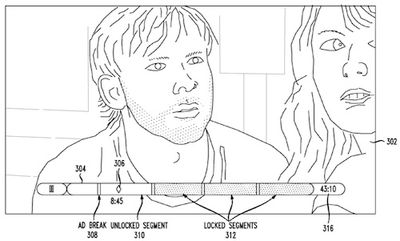 Patently Apple points to an interesting Apple patent application published yesterday describing methods of incorporating commercials into video content such that viewing of the commercials interspersed throughout the video presentation would be required in order to "unlock" portions of the content. The methods would allow users to freely navigate within a video presentation such as a television show while still requiring them to view commercials.

For example, a downloaded television episode may have multiple commercial breaks encoded into the file, and should a user attempt to navigate to a "locked" portion of the episode, they could be redirected to a commercial that, after viewing, would allow the user to "unlock" the desired content for viewing. Such implementations could allow for such options as one-time unlocking or limited-time unlocking after which the user would have to view commercial content again in order to access the locked segment.

Alternatively, the user's desired content could play immediately, but content from the required "unlocking" ad break could be displayed back-to-back with the following ad break at the next opportunity. A third option could be that the user's navigation request would simply be denied until they had reached the appropriate ad break to unlock the segment.

The system also offers the availability of ad "bundles" which can either be included with the downloaded content or offered separately, allowing for certain "bundles" of ads to expire at the end of a campaign and be replaced by new advertising.

Amid growing video downloads from the iTunes Store and reports of Apple developing a subscription-based package of television shows, it is clear that the company is thinking about ways of moving television content to its portable devices while providing methods for content providers to receive sustainable revenue streams. Whether that comes from per-download or subscription fees from users, advertising dollars, or some combination of those sources remains to be seen.