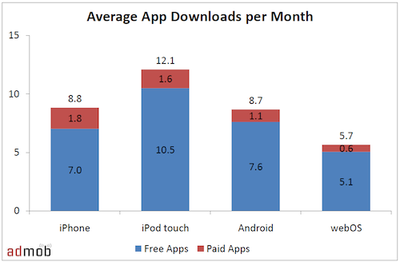 In looking at demographics of users, AdMob's survey found that iPhone, iPod touch, and webOS user bases are all in the range of 54-58% male, while Android skews much more strongly to 73% male. iPod touch users are also typically much younger than the smartphone users, with 78% of iPod touch users being below the age of 25 while only 24-25% of iPhone, Android, and webOS users are similarly below age 25. The data corresponds with previous comments made by mobile analytics firm Flurry regarding Apple's positioning of the iPod touch as building a base of future iPhone customers.

Wednesday August 17, 2022 9:51 am PDT by Juli Clover
Apple is aiming to hold its first fall event on Wednesday, September 7, reports Bloomberg's Mark Gurman. The event will focus on the iPhone 14 models and the Apple Watch Series 8. The standard iPhone 14 models are expected to get few changes, but the iPhone 14 Pro models will include updated camera technology, the removal of the notch in favor of a pill-shaped and hole-punch cutout, an A16...
Read Full Article • 166 comments