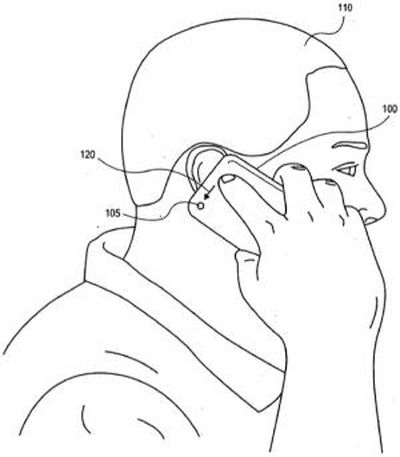 Patently Apple points to another interesting patent application from Apple filed in August 2008 and published this morning detailing means of controlling an iPhone or other handheld device by swiping one's finger across the camera lens. Most prominently, the document suggests the use of the proposed functionality to control voicemail options such as rewind, fast forward, pause and other options while the handset is held to the user's ear. The patent application also describes integration of an accelerometer to detect tapping input to supplement the finger swipes.

In another embodiment, functions for controlling call features utilize similar user actions or motions. Features such as merging multiple calls, putting a call on hold, and switching between or among multiple simultaneous calls may be controlled by single or double (or any number of) taps of the device, as detected by an accelerometer of the device. These taps may be preprogrammed by a manufacturer, or selected and programmed by a user.

Apple has clearly been researching methods of input for its handheld devices that do not directly involve a touchscreen. Several years ago, Apple filed a patent application describing the use of "back side touch" for controlling an iPod, while earlier this month the company was granted a patent for a touch-sensitive bezel. One analyst has also claimed that Apple's next-generation iPhone will include a touch-sensitive casing.
Related Forum: iPhone
[ 45 comments ]