In research note released this morning, RBC Capital Markets analyst Mike Abramsky shares the results of a ChangeWave survey of over 3,200 respondents earlier this month revealing pent-up demand for Apple's forthcoming iPad, with demand even exceeding that for the original iPhone in 2007. According to the survey, 13% of respondents are either somewhat or very likely to purchase an iPad, compared to only 9% in a similar survey conducted prior to the launch of the original iPhone. 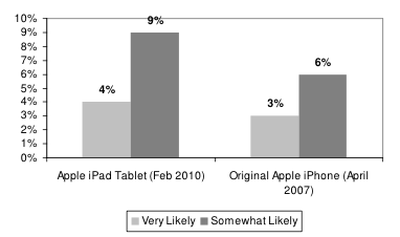 Percentage of respondents likely to buy iPad (Feb 2010) and iPhone (Apr 2007)
The survey also provides an interesting glimpse at model preferences for potential iPad buyers, with the highest percentages of buyers planning to purchase the low-end 16 GB Wi-Fi-only model at $499 and the high-end 64 GB Wi-Fi + 3G model at $829. Demand for the various capacities among the two iPad lines clearly shows opposing relationships, with budget-conscious customers focused on the Wi-Fi-only model opting for only 16 GB of storage while those springing for the added 3G connectivity are also preferring to max out on storage at 64 GB.

Model preferences for potential iPad buyers
The report also notes that only 8% of customers have balked at iPad pricing, significantly lower than the 28% who were unwilling to pay Apple's prices for the original iPhone prior to its launch.

In examining probable cannibalization of existing Apple products, the RBC/ChangeWave survey found 25% of respondents planning to delay purchasing one or more other Apple products in favor of obtaining an iPad, with the iPhone, iPod, and Mac notebooks all seeing potential hits in the 9-10% range. Cannibalization appears significantly lower for Mac desktop machines and the Apple TV.

Percentages of planned iPad buyers delaying purchases of other Apple products
(Sums to 33% due to some respondents delaying purchase of more than one product)
While the survey results suggest possible strong early adoption of the iPad and upside compared to previously-estimated customer purchasing plans, RBC continues to predict a base case of five million iPads sold for calendar year 2010, adding $2.4 billion in revenue and an additional $0.33 per share of earnings to Apple's bottom line.
[ 285 comments ]