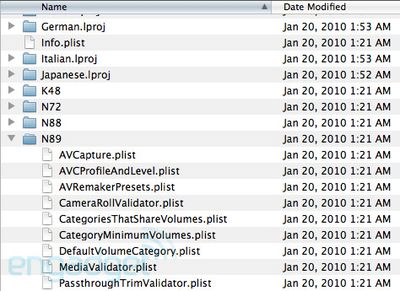 Engadget reports that an internal model number for Apple's next-generation iPhone ("N89") has apparently surfaced in the the new iPhone SDK 3.2 that was released alongside the introduction of the company's iPad tablet device.

Buried way inside the platform simulator lies a set of folders dedicated to specific models of iPhone OS-ready devices, including the iPhone 3GS, second generation iPod touch, something called the "K48" (yep, the codename we were told was the internal name for the iPad), and... the "N89." Sure, it sounds like a Nokia phone just waiting to happen, but this is -- according to our extremely knowledgeable and trusted sources -- likely the codename of the next iPhone (previous versions were called the M68, N82, and N88).

In addition, a similar entry entitled "N80" has also appeared in Apple's just-released iPhone OS 3.1.3 and reportedly corresponds to the next-generation iPod touch.

Interestingly, Apple's just released firmware (3.1.3) also includes another new model, the "N80," which we're told will most likely be the next version of the iPod touch.

Apple Seeds Fourth Betas of iOS 15.6 and iPadOS 15.6 to Developers