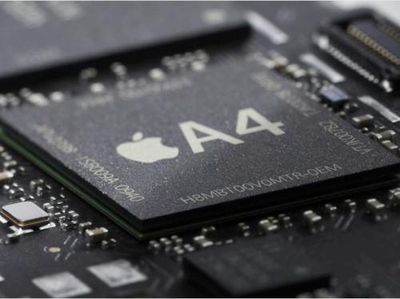 Bright Side of News claims to have information on Apple's "A4" chip unveiled as the brains behind the company's new iPad tablet device. Unsurprisingly, the CPU included in the chip is said to be based on the ARM Cortex A9 licensed by Apple and implemented by its team of chip designers acquired as part of its 2008 purchase of P.A. Semi.

While it should be no surprise that the Apple A4 processor is based on the ARM Cortex A9 design which will begin shipping to many manufacturers this year, the article incorrectly states that the Qualcomm Snapdragon and nVidia Tegra were also based on this design. Those processors were based on the Cortex A8 -- the same processor design found in the iPhone 3GS. This new potentially multi-core processor has only recently been introduced in the Tegra 2 first demoed at CES 2010.

The site also makes a dubious claim that Apple is using the ARM Mali 50-Series GPU for its graphics hardware which would represent a departure (and potential downgrade) for Apple from the PowerVR chips that they've used in the past. Apple is a licensee and major stakeholder in Imagination Technologies, the company behind the PowerVR chipset.

Amongst the varied reactions to the Apple iPad, one common impression has been the notable speed increase of the device compared to the existing iPhone and iPod Touch. We would expect Apple to adapt the A4 design into the next generation iPhone which is expected later this year.

Friday December 3, 2021 7:10 am PST by Hartley Charlton
Apple's AirTags are being used in an increasing number of targeted car thefts in Canada, according to local police. Outlined in a news release from York Regional Police, investigators have identified a new method being used by thieves to track down and steal high-end vehicles that takes advantage of the AirTag's location tracking capabilities. While the method of stealing the cars is largely ...
Read Full Article • 219 comments

Sunday December 5, 2021 7:55 am PST by Hartley Charlton
Apple is working on five new Macs for launch in 2022, including a new version of the entry-level MacBook Pro, according to Bloomberg's Mark Gurman. In the latest edition of his "Power On" newsletter, Gurman said that he expects Apple to launch five new Macs in 2022, including: A high-end iMac with Apple silicon to sit above the 24-inch iMac in the lineup A significant MacBook Air...
Read Full Article • 148 comments