The Mac Observer reports that it has received an image from a source showing what is claimed to be the "glass" for Apple's much-rumored tablet device, although the image actually depicts a front bezel. 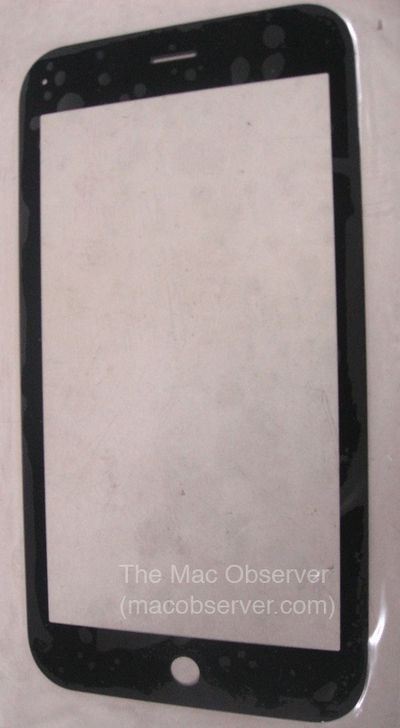 With no sense of scale for the image, the report relies on the source's claim that the "glass" (presumably the bezel opening for the screen) measures in at 10 inches. The bezel has a nearly-identical appearance to that of the iPhone aside from the claimed size, with a home button at one end of the screen and a slot similar to that of an iPhone's speaker at the other end. The image also depicts a small hole at the top left corner of the bezel, with speculation centering on it possibly being for a camera lens.

We aren't positive about how this device would be presented, but we thought it made the most sense in a vertical alignment. If it is legit, one wold think that the slot at the top is for a speaker, while the hole in the upper left could be for a camera lens. The button on the bottom, of course, would likely be a Home button, the same with the iPhone.

As for the reliability of the source, The Mac Observer notes only that it is trusted. We, however, are extremely skeptical of the claims, and barring additional evidence, we are posting this item on Page 2 merely for interest and discussion.

Friday December 2, 2022 10:54 am PST by Juli Clover
Google is continuing on with its attempt to convince Apple to adopt the RCS messaging standard, publishing a new "it's time for RCS" blog post. Promoted heavily by Google, RCS or Rich Communication Services is a messaging standard that is designed to replace the current SMS messaging standard. It provides support for higher resolution photos and videos, audio messages, and bigger file sizes, ...
Read Full Article • 507 comments

Friday December 2, 2022 11:43 am PST by Joe Rossignol
Goldman Sachs this week updated its Apple Card customer agreement to reflect the credit card's upcoming Daily Cash savings account feature, which was expected to launch with iOS 16.1 but appears to have been delayed. "To enable new ways to use Daily Cash like the upcoming Savings account feature, we are updating the Daily Cash Program section of your Apple Card Customer Agreement," reads an...
Read Full Article • 58 comments