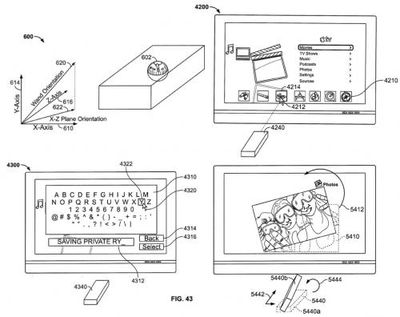 Apple updated an existing patent application today that describes the implementation of a previously dubbed "Magic Wand" remote control to provide a more natural control experience when navigating a product like the Apple TV. Readers will recognize that many of the described technologies work like the Nintendo Wiimote. Similarly, Apple describes the use of a accelerometers as well as fixed points of reference to determine the movement of the remote. Other patent applications in the past have shown us more of this research coming out of Apple.

Naturally, the use of this "Magic Wand" could be used to browse media, fast forward/rewind, rotate images and even zoom in and out by moving the wand closer or further from the screen.

We don't necessarily think Apple would introduce a standalone Wii-like remote system, though there have always been persistent rumors of a much enhanced version of an Apple remote control. Apple has already integrated some advanced remote control features into an iPhone App that takes advantage of gestures and accelerometer controls.