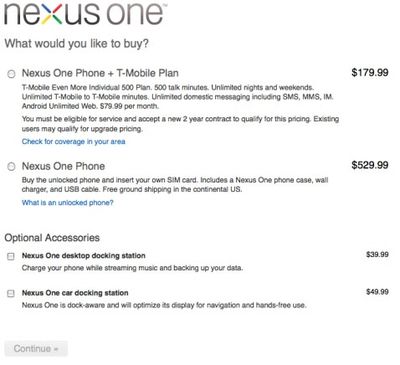 Anticipation surrounding the much-rumored "Google Phone", now apparently known as the Nexus One, has been growing in recent weeks, and it appears that the rumors were correct: Google has announced an Android-related press conference for January 5th, and all indications point to a launch of the Nexus One at the event.

A source has also provided information to Gizmodo claiming that the Nexus One will be offered at an unsubsidized price of $529.99, or at $179.99 with a two-year agreement on T-Mobile.

- Yeah, it's $530 unsubsidized. Google's not going to be selling the phone at cost, like so many people considered. They're not going to save us from the "making money off of hardware" culture we've got right now, so this is basically just another Android handset, albeit a really good one
- If you want it subsidized, you'll have to sign up for a 2 year mandatory contract and pay $180 for the phone

T-Mobile will reportedly offer only a single rate plan for the Nexus One, with unlimited talk, text, and web for $79.99 per month. Subsidized handset pricing is apparently only available to individual subscribers, and family plan and FlexPay subscribers and other special accounts will be required to purchase the Nexus One at the unsubsidized price.

Sources have also indicated to TmoNews that Google will begin taking orders for the Nexus One on January 5th.

The Nexus One has received favorable reviews from those who have been able to handle the new device, but most observers see it as competition for the Motorola Droid within the Android market segment rather than being positioned as a true "iPhone killer".