In the wake of yesterday's provocative hint suggesting that users would be "surprised how you interact" with Apple's much-rumored tablet, speculation has begun about what that surprise might be. Conveniently enough, a patent application published today entitled "Keystroke tactility arrangement on a smooth touch surface" revisits previously-revealed technology from Apple regarding possible tactile feedback for a touchscreen device such as a tablet.

The technology described in the patent application addresses several mechanisms for providing tactile feedback for a keyboard displayed on a smooth touchscreen surface, including: 1) use of protruding bumps to identify keys; 2) use of an "articulating frame" that can raise and lower depending on whether the screen is being used for gesturing or typing to offer the user a frame of reference for key edges; and 3) use of fixed key edges below a compliant gel or foam surface that would be smooth when subjected to light pressure of gesturing but offering tactile ridges under harder pressure of typing.

Disclosed are four arrangements for providing tactility on a touch surface keyboard. One approach is to provide tactile feedback mechanisms, such as dots, bars, or other shapes on all or many keys. In another embodiment, an articulating frame may be provided that extends when the surface is being used in a typing mode and retracts when the surface is used in some other mode, e.g., a pointing mode. The articulating frame may provide key edge ridges that define the boundaries of the key regions or may provide tactile feedback mechanisms within the key regions. The articulating frame may also be configured to cause concave depressions similar to mechanical key caps in the surface. In another embodiment, a rigid, non-articulating frame may be provided beneath the surface. A user will then feel higher resistance when pressing away from the key centers, but will feel a softer resistance at the key center. 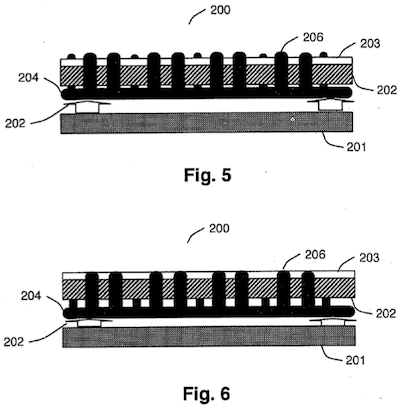 "Articulated frame" for demarcating key edges in raised (top) and lowered (bottom) positions
The patent application also describes the use of automatic methods for activation and deactivation of the articulated frame, utilizing the touchscreen capabilities to sense sliding or mouse-click-like tapping as requiring the frame to be deactivated, and "home row" positioning of fingers or asynchronous tapping as requiring the frame to be activated.

This new patent application, filed in August, is actually a divisional of a previous application filed in April 2006, with the new application focusing only on touchscreen-based keyboard applications. The patent application is credited to Wayne Westerman, founder of FingerWorks, the company acquired by Apple in 2005 that is responsible for the multi-touch technology used in the iPhone and a number of other Apple products.