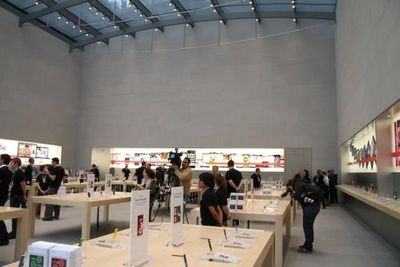 Ground Floor of Apple's Upper West Side Retail Store
Gizmodo reports on a number of tidbits offered by Apple Senior Vice President of Retail Ron Johnson at a media preview event held today at the company's Upper West Side store scheduled to open in New York City on Saturday. Among the most notable items of interest were comments that Apple is looking to move forward aggressively on store openings in the coming year and is adjusting its strategy to include larger stores and more "significant stores" offering iconic presences such as the Upper West Side store.

Apple realized they were going too small with their stores, so now all of their stores will be at least "three tables wide." In other words, they're going to be bigger. They're also going to be opening more stores next year, more like 50. More of them will be "significant stores," iconic ones like the Fifth Ave. store with the Apple Cube. And they'll be going more international, adding stores all over Europe, like the UK, Paris and two in Shanghai getting those "significant stores."

Johnson also noted that the company's retail stores are averaging approximately $26 million in yearly revenue, only slightly below that of Macy's, Target, and Best Buy, but with much smaller stores leading to per-square-foot sales five times that of Best Buy. On the topic of Microsoft's retail stores, Johnson acknowledged the competition but offered up a simple response to the challenge, claiming "It's nice to have a 10-year head start."

Finally, Gizmodo offers up an inside look at the Upper West Side store, calling it a "temple" to the company's products.

I can't tell you - and the pictures can't show you - how utterly open and expansive the room feels. Apple says it has more demo units than any other store in the world. To give you an idea of the space, the walls are 45 feet tall, and could fit 11 Apple 5th Avenue Cubes inside. It's the spareness that's breathtaking. It's cold. Not literally, but the stone walls, the glass, the sheer space rob it of any sense of warmth or feeling. The only sense of life in room is the products. It's a temple to them, really.