ifoAppleStore reports that Apple has agreed to spend nearly $4 million to refurbish a run-down subway station adjacent to its future retail store on Halsted Street in Chicago. In exchange, Apple will receive from the Chicago Transit Authority (CTA) a free long-term lease on an unused bus turnaround dividing the subway station from the Apple store that will allow the company to turn the space into a landscaped public park.

Over the years, the CTA's building has fallen behind on maintenance. The paint is peeling, the windows are filthy, an electrical sign has dangling wires, and metal framing is rusting. Inside the building and underground, the station features white tile walls and fluorescent lighting, with hallways leading to two narrow platforms underground.

In the agreement approved at an August 19th Chicago Transit Board meeting, in exchange for the improvements the CTA will lease the bus turnaround to Apple at no cost for 10 years, with options on four, five-year extensions. The CTA will also give Apple "first rights of refusal" for naming the station and placing advertising within the station, if the CTA later decides to offer those rights.

Apple will reportedly spend up to $1,789,000 on its own refurbishment of the exterior of the station building, while it will pay the CTA up to $2,108,000 to perform upgrades on the station's interior. The timeline calls for the work to be completed by September 30, 2010, suggesting an approximate opening date for the store, for which structural steel has already been erected. 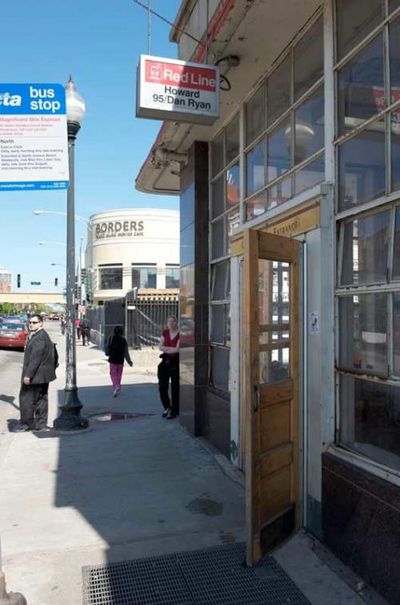 Saturday February 4, 2023 10:05 am PST by Eric Slivka
Online retailer TigerDirect has slashed pricing on the M1 iPad Air in several colors, offering the base 64GB configuration for just $313.99 in Purple and Pink. Note: MacRumors is an affiliate partner with TigerDirect. When you click a link and make a purchase, we may receive a small payment, which helps us keep the site running. That's a savings of 48% compared to Apple's normal $599.00...
Read Full Article • 510 comments