Following on the heels of yesterday's dissection of the new MacBook, the remainder of Apple's major new products have now been subjected to similar analysis. 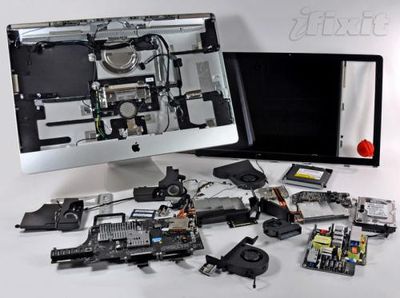 27" iMac Teardown (iFixit)
First, iFixit features the new 27" iMac. Among the discoveries in the teardown:

- Use of the 27" iMac as an external display via its MiniDisplayPort connector requires that the machine be fully powered up, as the signal is routed through the main logic board.
- The 27" iMac unsurprisingly carries the biggest power supply ever seen in an iMac, putting out 310 watts.
- The CPU and GPU are located on opposite sides of the machine and have separate massive heat sinks, allowing Apple to utilize desktop-class processors within the thin iMac's profile for the first time. In addition to the heat sinks, the iMac carries six temperature sensors and three large fans to aid in heat dissipation.
- The AirPort antenna is routed to directly behind the Apple logo on the rear of the machine, providing better Wi-Fi performance by placing the antenna next to the only plastic portion of the machine's back.

iFixit also dissected the new Magic Mouse that is included with the updated iMac models and can also be purchased separately. The teardown reveals the expected touch sensor capacitors under the top surface of the mouse from the Apple logo forward. The Magic Mouse also uses a keyboard-and-mouse-specific BCM2042 Bluetooth chip from Broadcom for communication.