According to market research firm NPD's 2009 Household Penetration Study, approximately 12% of U.S. computer-owning households have an Apple computer, up from 9% in last year's study. But of these Mac-owning households, nearly 85% of them also own at least one Windows PC.

The study also notes that Apple households tend to be more affluent than average computer households, and Apple owners also tend to own more types of consumer electronics devices (and twice as many of them) than the average computer-owning household. 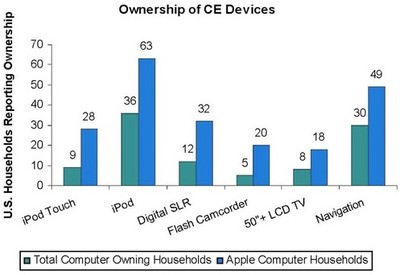 Source: The NPD Group/2009 Household Penetration Study
The study notes that because these characteristics place Apple owners at the forefront of consumer electronics, their purchasing decisions can be valuable to the industry as a measure of upcoming trends and popular products.
[ 117 comments ]