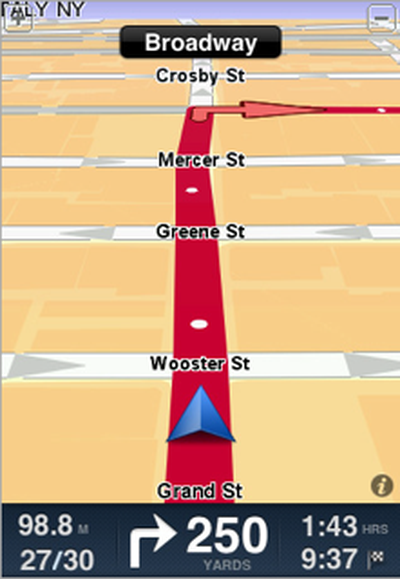 The App Store application prices obviously include only the iPhone application and not the companion car kit that will integrate a car mount, enhanced GPS receiver, built-in speaker, and power cables. The kit will also include an audio output jack, as well as a microphone to enable use of the iPhone as a Bluetooth speakerphone. A package supposedly containing both the hardware and software components appeared for pre-order early last month priced at 99 (US $163.39) plus taxes at UK retailer Handtec, although the legitimacy of the offer remains unclear.

It is unknown whether the applications' appearance on the New Zealand App Store is the first phase of a rollout to multiple countries or if the release was a premature addition.

Update 2: TomTom iPhone applications have now appeared in a number of European stores. In addition to the standard four applications (Australia, New Zealand, U.S. & Canada, and Western Europe), each European App Store is also carrying a fifth TomTom application offering a more narrowly localized version for the respective countries at a lower price point than the complete Western Europe version.

Update 3: TomTom applications have now appeared in the U.S. and Canadian App Stores. Prices in both stores are as follows: