Object Recognition: One patent application, filed on June 17th, 2008, describes methods by which a mobile device user could detect an object via camera, RFID sensor or other means and have their device automatically identify and provide additional information on the object. In Apple's background information on the patent, an example of an art museum is used, describing how a user might take a photo of a piece of art and wish to have it automatically identified and additional information on it provided, or engage in an audio tour or podcast and wish to access additional content beyond that provided in the audio files. 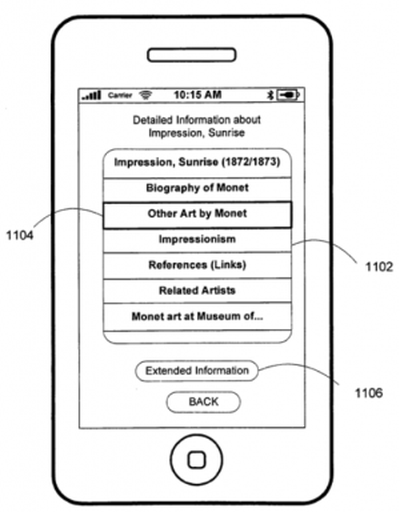 Object recognition
Facial Detection: Another patent application, filed on March 8th, 2008, addresses the use of facial detection to allow a device to determine whether a user is passively interacting with the device. As an example, Apple describes how a user watching a video may have to periodically interact with a device in order to prevent a screen saver from activating. Apple's invention utilizes automatic facial detection via a camera on the device to determine that a user is present. The method may also be used to grant or deny users access to restricted applications or other data.

Message Filtering: Conceived as an extension of Parental Controls, this application, filed January 3rd, 2008, covers the ability for users to filter incoming or outgoing text-based messages based on their content. User-defined criteria could allow messages containing objectionable material to be edited to remove the content or be blocked entirely. Additionally, the technology could be used to require certain content to be present in messages. For example, a parent might require that messages contain proper spelling and grammar, or certain vocabulary words, or a certain number of words in a foreign language over a set period of time in order to aid a student in his or her studies.

Managing Multiple-Recipient Messages: In a patent application filed January 6th, 2008, Apple describes a method for managing messages with multiple recipients. The invention covers the ability for an application monitor whether the message has been delivered to all recipients, and if not, provide a simple interface for resending at a later time to those who have not received the message.

Unread Message Alerts: An application filed January 3rd, 2008 covers the ability for a device to automatically provide unread message alerts when a user is about to contact another party. For example, as a user begins to compose an e-mail to another person, the device may alert the user to unread messages from the second party that they may wish to view before sending their e-mail. The alert criteria may simply include the message recipient's name, but could also be expanded to specify content on the same subject as the intended message.

Unread message alerts
Voice Modulation: In a final patent application filed April 2nd, 2008, Apple describes methods for modulating voice audio output to simulate additional voices. Apple's examples describe a mother who could have an audiobook read in her voice to her child or a student who wishes to alter a section of a podcast lecture for emphasis.
Related Forum: iPhone
[ 58 comments ]