A patent application from Apple filed in October 2007 and published today reveals that the company is researching the use of carbon fiber composites for use in the exterior shells of electronic devices. Specifically, the patent application relates to the use of a "scrim" layer on the exterior surface of the carbon fiber laminate allowing for an "improved cosmetic surface." 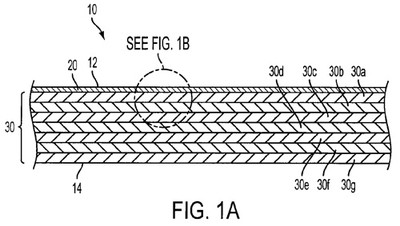 In the background for the application, Apple objects to the appearance of typical carbon fiber composite materials:

Apple's insistence on aesthetic designs has apparently led the company to focus efforts on improving the visual appeal of such carbon fiber composites, which hold significant appeal for notebook computer design due to their strength and light weight.

A rumor from November 2008 claimed that Apple was exploring the possibility of replacing the bottom case of the MacBook Air with a carbon fiber composite in order to shave approximately a quarter pound off of the machine's total weight.

Friday May 14, 2021 11:52 am PDT by Juli Clover
Following the discontinuation of the iMac Pro, Apple also appears to be discontinuing Space Gray "Magic" accessories that it sold separately alongside the iMac Pro. The iMac Pro was the only Space Gray Mac, and Apple designed special matching accessories for it. The Space Gray Magic Mouse 2, Magic Keyboard, and Magic Trackpad all now say "While supplies last" in small wording at the bottom...
Read Full Article • 348 comments

Sunday May 16, 2021 2:39 pm PDT by Eric Slivka
The Browse tab in the Music app across Apple's platforms has started displaying a prominent teaser hinting at an upcoming major announcement for Apple Music. Under the heading "Coming soon," the headline says "Get ready – music is about to change forever." An accompanying "Tune-In Video" simply shows an animated Apple Music logo. Rumors have indicated that Apple is preparing to launch a...
Read Full Article • 105 comments