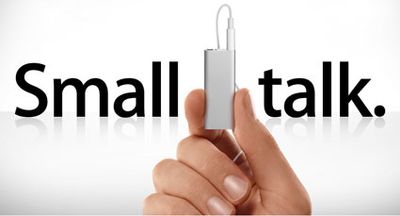 Apple released two new iPod Shuffles with an even smaller design today. The updates were predicted at the very last minute this morning.

The new 4GB devices are priced at $79 and can hold up to 1000 songs. These new iPod Shuffles adopt a more vertical shape than the previous model, but are smaller overall. The previous generation iPod shuffles remain available for purchase.

Apple also added a new "VoiceOver" feature that allows the iPod shuffle to speak your song titles, artists and playlist names. All of the controls are located on the earphone cord.

"Imagine your music player talking to you, telling you your song titles, artists and playlist names," said Greg Joswiak, Apple's vice president of iPod and iPhone Product Marketing. "The amazingly small new iPod shuffle takes a revolutionary approach to how you listen to your music by talking to you, also making it the first iPod shuffle with playlists."

Using the VoiceOver feature, the new Shuffle allows you to pick and choose between different playlists. More details are available on Apple's iPod Shuffle section of their website. They also provide a Guided Tour video (direct QuickTime link) that walks through the new features.