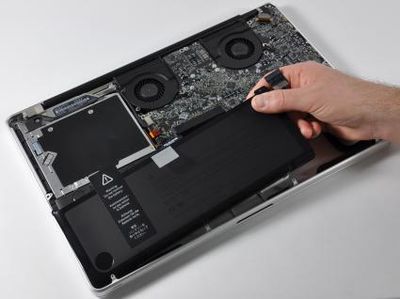 iFixit has already posted disassembly photos of the new 17" unibody MacBook Pro that has started arriving in customers hands. iFixit's disassembly guides are always very educational but also incredibly useful for your own repairs or modifications.

The 17" MacBook Pro was announced at Macworld San Francisco and incorporates Apple's new unibody design but with a non-removable battery.

Due to this design change, access to the internal components now requires the use of a screwdriver. iFixIt's photos show how to access the RAM and Hard Drive of the new machine. Apple also provides instructions on the process in their 17" MacBook Pro Manual (PDF). Both RAM and Hard Drive are considered user-serviceable items, while the battery is not.

Other Notes from iFixit:

- Apple's using wide, thin black rubber bumpers on the Unibody Pros, a departure from the small stubby bumpers on the Aluminum revisions.
- There are ten Phillips screws around the perimeter of the lower case to remove.
- It's only a matter of time until you'll be able to buy this battery online from companies like [iFixit].
- The battery weighs 20.1 ounces (1.25 pounds or 570 grams). That's 20% of the computer's weight!