MacRumors has discovered that Apple's iPhone 2.x Firmware has evidence of the next generation iPhone which has been designated "iPhone2,1". 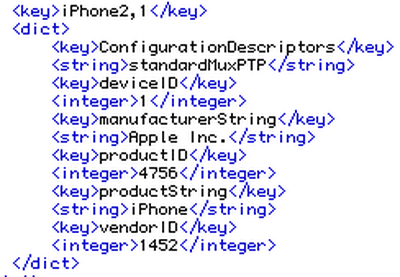 Apple uses these models numbers to distinguish between different hardware models. The original iPhone carries the model number of "iPhone 1,1" while the 3G iPhone is labeled "iPhone 1,2". These numbers do not change for simple storage increases and instead represent functionally different devices. Similarly, the iPod Touch was originally introduced as the "iPod 1,1" and the most recent hardware revision was labeled "iPod2,1". The 2,1 iPod Touch added a speaker, volume controls, microphone support and a much faster processor than the 1st generation model. This new model number can be found in the USBDeviceConfiguration.plist in an unencrypted firmware.

Meanwhile, at least one developer has noticed actual "iPhone2,1" models in use based on PinchMedia ad serving reports. (Other numbers blurred out).

Rumors of the next generation iPhone point to the support of Multi-Core CPUs and possibly Multi-Core GPUs from Imagination Technologies. Apple has been building a team of chip engineers over the past year to participate in their own ARM processor designs that will presumably be used in future iPhones. Schiller previously outlined Apple's natural product timelines and acknowledged that June is the usual timeframe for major iPhone revisions, although storage increases could happen at any time.

Thursday September 29, 2022 12:38 pm PDT by Juli Clover
Tony Blevins, Apple's vice president of procurement, is set to depart the company after he made a crude comment about his profession in a recent TikTok video, reports Bloomberg. Blevins was in a video by TikTok creator Daniel Mac, who was doing a series on the jobs of people he spotted with expensive cars. After seeing Blevins in an expensive Mercedes-Benz SLR McLaren, Mac asked Blevins what ...
Read Full Article • 519 comments