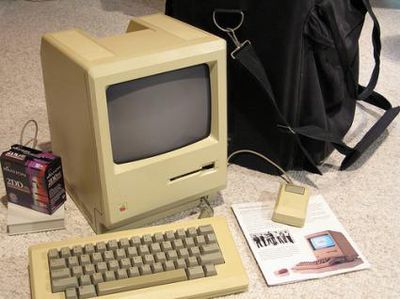 Twenty-five years ago today, Steve Jobs introduced the Macintosh at an event in the Flint Center for the Performing Arts to an audience of about 3000 people (YouTube video).

"There wasn't a person in the room who didn't think this was history happening," recalled Richard Doherty, analyst with the Envisioneering Group, who was there.

Computerworld recaps some of the history surrounding the original Mac project which was originally considered just a "research project":

After the failure of the Apple III, the Apple board had reservations about allowing Jobs to manage another high-profile project. When Jobs asked to take over the Mac project, the board allowed him to do so, feeling that the relatively unknown project wasn't critical to Apple's wellbeing.
....
The result was a resolution by Jobs and his Mac team not only to make a "baby Lisa" but also to turn the Mac into a product that could advance the computing industry as much as or more than the Apple II had done -- or, as Jobs has been quoted as saying, to "put a dent in the universe."

The introduction of the Macintosh was also marked by the broadcast of Apple's famous 1984 commercial (YouTube Video) during that year's Super Bowl.

Readers interested in more of the history of the original Mac should visit Folklore.org which has collected anecdotes about the original Macintosh project and the people who created it. Meanwhile, Mac512.com has posted video from a 1984 VHS tape produced by Apple to showcase the Macintosh as well as the new Mouse/Desktop interface.