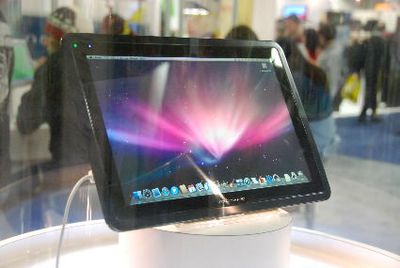 Axiotron, with advisor and Apple co-founder Steve Wozniak on hand, announced the Modbook Pro, a new tablet Mac based on the MacBook Pro. Pre-orders are available starting at $4998 for a complete system, or $3049 for users providing their own MacBook Pro for conversion. Orders are expected to begin shipping in May or June of this year.

TechRestore is offering a Matte screen replacement option for unibody 15" MacBook Pro owners who just can't deal with the glossy screen, a common concern after Apple discontinued the offering of matte screens from some of their notebooks. Cost for this replacement service is $199.

Matias announced Tune Blocker, a USB-to-Dock connector for the iPhone and iPod touch containing a switch allowing the user to select whether to charge and sync their device with iTunes as usual or to charge the device without mounting and syncing it in iTunes. Designed to help prevent users from accidentally overwriting their iPod data when connecting to a computer other than the one normally used for syncing, the connector will begin shipping in March with a 3-foot cable ($24.95) or 6-foot cable ($29.95).

Joby was showing off their Gorilla Pod camera stands which allow you to securely mount your camera onto "anything". Prices range from $24.95 to $139.95 depending on the size.