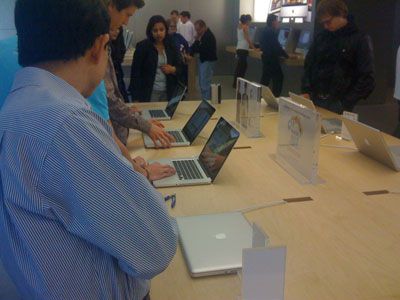 Engadget posts a series of unboxing shots, and both Engadget and Macworld posted their first impressions. We've also gathered a few other notes of interest:

- MacBook is half a pound lighter than previous.
- MacBook Pro is two-tenths of a pound heavier than previous.
- Trackpad is surprisingly usable: "The click feels similar to the traditional button -- though slightly more resistive -- and you're able to do right-clicking by either a two-finger gesture or assigning one of the bottom corners." (Video demo) - Engadget
- "Place four fingers on the trackpad and flick them up, and Expose hides all your windows and exposes the desktop. Flick down with the same four fingers, and Expose shows all windows. Swipe left or right and the application switcher appears." - Macworld
- Kodawarisan has already posted some disassembly photos of the new MacBook.
- The mystery port from the leaked photos is the battery indicator (now on the side)
- The MacBook does not have Firewire
- The MacBook Pro has Firewire 800 (which supports Firewire 400)
- Apple has posted a manufacturing video (QuickTime) of how the new MacBooks are created from a slab of aluminum.
- The $1299 MacBook does not have a backlit keyboard