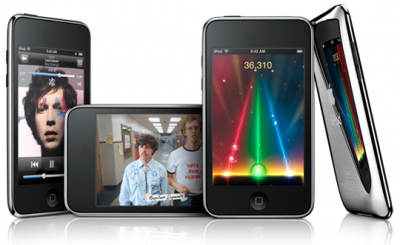 Apple released the new iPod Touch today at their media event. The new iPod Touch matches up with the rumors, now sporting a curved back but retaining the same storage capacities. Features include:

Apple also appears to be positioning the iPod Touch as a gaming device with a new ad that shows off a number of games and calls it the "funnest iPod ever". Phil Schiller also demonstrated a number of games on stage, including Spore Origins, Real Soccer 2009 and Need for Speed: Undercover.

Spore Origins was released for the iPhone and iPod Touch just yesterday, and a first look gameplay video of Real Soccer 2009 has been posted to TouchArcade.com.

The 2.1 upgrade will be available for free for current iPod Touch owners with Firmware 2.0.

The new iPod Touches should appear at http://www.apple.com/ipodtouch/ later today.