Intel has started releasing some details about their upcoming GPU project code named Larrabee. New graphics cards based on this technology will compete with NVidia and ATI video cards that currently dominate the market. Larrabee appears to be a hybrid design between existing CPUs and GPUs, according to Extremetech:

Each of these Larrabee cores is quite distinct from the execution "cores" in many current graphics processors. It's not the x86 instruction set that makes it special (though that is certainly unique as well). Rather, it is the support for full context switching and preemptive multitasking, virtual memory and page swapping, and full cache coherency. These are features developers have come to expect in modern x86 CPUs, but don't yet exist in modern GPUs.

The advantage of such a design is said to be improved scalability as additional processor cores are added. Intel claims an almost linear improvement in gaming performance as the number of processor scores increase: 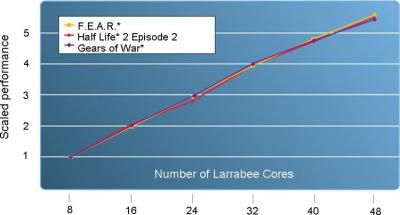 Intel also explains that existing programming APIs such as DirectX and Open CL can be used so existing games should be able to take advantage of Larrabee. While Apple has made no announcements surrounding the adoption of Larrabee, Arstechnica's Jon Stokes claims that Apple will be adopting it:

And I've heard from a source that I trust that Apple will use Larrabee; this makes sense, because Larrabee, as a many-core x86 multiprocessor, can be exploited directly by GrandCentral's cooperative multitasking capabilities.

Intel is quick to point out that describing Larrabee as just a GPU is misleading, in that they expect Larrabee multi-core processors could be used in a number of applications outside of gaming.

Larrabee is expected to be released in 2009-2010 and will be initially targeted at "the personal computer market". Apple should be well equiped to leverage this technology with the introduction of Snow Leopard sometime in 2009. Snow Leopard will incorporate tools such as Grand Central and Open CL to harness both multi-core and GPU processors.