Apple has not yet officially released the final version 2.0 Firmware for original iPhone owners, but the App Store does appear to have gone live, and now appears as a link in the iTunes Store. Based on some early experiences with the App Store, we've consolidated these notes and observations.

Application screenshots can be taken by everyone running Firmware 2.0. By simply holding down the home button and the on/off button simultaneously, you will see a "flash" of white appear on the screen, and a screenshot will have been saved to your Photo roll. Simply syncing your photos to iPhoto will transfer them to your computer. Some forum members have taken advantage of this feature to create a screenshot thread in our App Store forum where they are collecting screenshots from various applications. Additional screenshots are also available at Ars Technica, OrchardSpy, Engadget and AppleInsider. 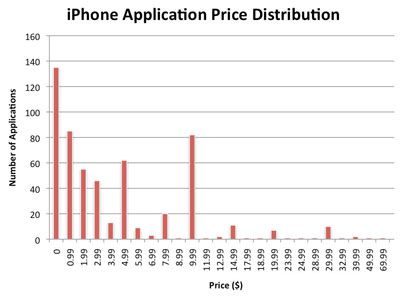 Graph from PinchMedia
The pricing of iTunes Applications will likely remain in flux as the market establishes itself. ReadWriteWeb points us to the above graph by PinchMedia which breaks down how iTunes Apps are being priced at this time. There are clear spikes at Free, $4.99 and $9.99, but there are a number of apps that fall under the $4.99 price.

What's most interesting, however, is Phill Ryu's observation that every iTunes App publishes their download stats on their info page as seen on the iPhone. For example, AOL's free AIM client has already logged over 12,000 downloads:

Now, when we look at a highly publicized application, such as Super Monkey Ball, we see it has attracted 3927 customers at $9.99/download. This means they've netted $27,462 so far today after Apple's 30% cut. Hard to draw too many conclusions, especially since the App Store only officially launched this moment, and the official 2.0 Firmware has not been released. Meanwhile, less publicized apps have only seen downloads in the double digits so far.