The United States Patent and Trademark Office revealed at least a dozen new patent applications from Apple this morning. The majority of the applications revealed ongoing multi-touch research by Wayne Westerman, the former cofounder of Fingerworks.

We've seen many exciting multi-touch patent applications from Apple over the past few years including screenshots of a Mac OS X implemenation of advanced multi-touch gesturing.

Today's patent applications cover ongoing research in refining the touch experience by avoiding unintentional contact and advancing the hardware technology itself, but a few interesting tidbits were also found.

One patent application titled "Gesture Learning" describes methods to teach these advanced gestures to users. Many readers have been concerned that previously depicted gestures for advanced multi-touch applications may be too hard to learn. In order to combat this hurdle, Apple is researching the use of visible feedback such as animated motion trails and/or hand motions as well as interactive games to teach users these gestures.

Another interesting possibility raised is the use of both capacitance (finger tip) and resistance (fingernail) to provide secondary functionality in future touch screens. The iPhone introduced a multi-touch capacitance based screen that allowed it to recognize bare finger touches only. This means that the iPhone will not respond to fingernails, gloved fingers touches or a standard stylus. 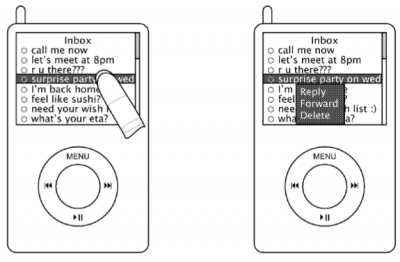 Unfortunately, we'll have to wait for a future Apple device to take advantage of these features as the current iPhone is not capable of this functionality.