If there was any doubt where some at Apple think the direction of the future is, a new patent application describes the progression of the computer user interface over the years:

Many attempts have been made over the years to improve the way users interact with computers. In the beginning, cards or tapes with punched holes were used for user input. Punch cards gave way to terminals with alphanumeric keyboards and text displays, which evolved into the modern keyboard, mouse and graphical-display based graphical user interfaces. Many expect that the use of multi-finger, touch-sensitive user interfaces ("multi-touch interfaces"), such as those described in the references incorporated above, will become widely adopted for interacting with computers and other electronic devices, allowing computer input to become even more straightforward and intuitive.

This particular patent is credited to John Elias and Wayne Westerman who were founders of Fingerworks, a company who had done much work in the field of touch-interfaces. Apple acquired Fingerworks in 2005.

Elias goes on to describe how multi-touch gestures can have a broad vocabulary and invoke a number of actions. The patent application describes how to implement dictionary of gestures ("chords") which are made up of a combination of fingers, thumbs, and/or other hand parts. The dictionary would be presented to the user for teaching purposes but could also allow the user to assign meanings to particular gestures.

An extremely broad vocabulary is described in that Elias explains that each user's hands can execute twenty-five combinations based on five independent fingers. In the end, over 300 possible combinations are expected per hand.

Examples given include "Thumb & 1 Finger" combinations producing on action: 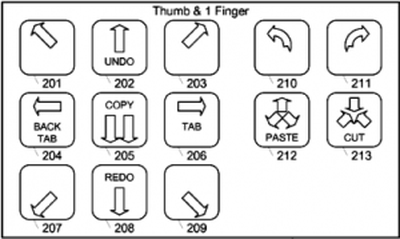 This patent application was filed January 3, 2007 and was just published today. Apple's iPhone presently utilizes a multi-touch interface, but only implements a limited number of gestures, but there have been hopes that Apple would expand this interface to iPods and Displays