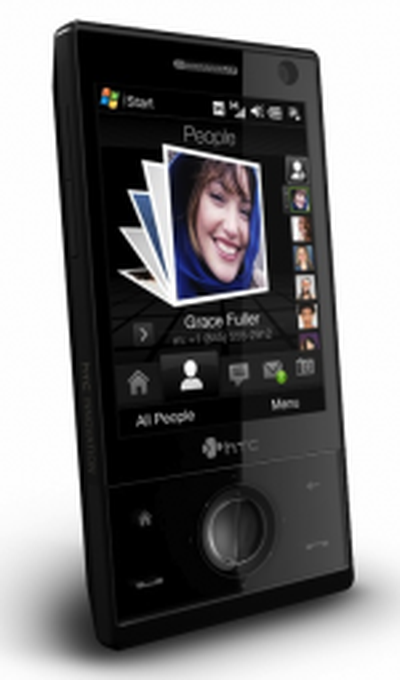 Today, HTC announced the Touch Diamond, the latest in a number of phones that are taking aim directly at the iPhone. As a Windows Mobile 6.1 device, the phone will draw only a passing interest amongst Mac users, but shows off the efforts that Apple's competitors have put into their newest devices.

The 3G capable phone carries slightly smaller dimensions (102 x 51 x 11.33mm and 110g) than the iPhone (115 x 61 x 11.6mm and 135g) and also houses a smaller 2.8" touch screen. While the screen is physically smaller, it carriers a higher resolution (640x480) compared to the iPhone (320x480). It does include a front-mounted camera for video conferencing, which has been a rumored feature of the next generation iPhone.

The screen itself appears to be capable of recognizing only single touch vs the iPhone's multitouch. A lot of effort and focus appear to have gone into the user interface, which is described as a TouchFLO 3D interface and provides Coverflow-like views for browsing contacts and music. In an interesting move, HTC has replaced the default Mobile Internet Explorer with Opera, an effort to provide a "desktop class" browsing experience on their mobile device. Other features include an accelerometer, GPS, Youtube App, Google Maps, and a 3.2 megapixel camera. One early hands-on experience described the interface as a bit "sluggish", though it was said to be "not the final version" of the software.

A series of Youtube videos demonstrates various features: Photos, Weather, Contacts, Music, in actual use. Other video: accelerometer game. Photos and hands-on at Crave.cnet.co.uk. The phone will launch initially in Europe and Asia in June, with a U.S. launch later.

Friday June 18, 2021 9:41 am PDT by Sami Fathi
After a long wait, YouTube for iOS is officially gaining picture-in-picture support, allowing all users, non-premium and premium subscribers, to close the YouTube app and continue watching their video in a small pop-up window. In a statement to MacRumors, YouTube says that picture-in-picture is currently rolling out to all premium subscribers on iOS and that a larger rollout to all US iOS...
Read Full Article • 162 comments

Wednesday June 16, 2021 11:26 am PDT by Juli Clover
Update: Bloomberg inaccurately interpreted the original comments and has since drastically changed the wording of its article. The original Bloomberg piece said that Apple would be prohibited from pre-installing its own apps on iPhones. The updated Bloomberg article has been rewritten to clarify that the antitrust legislation prohibits Apple from preventing users from removing Apple-created...
Read Full Article • 519 comments