Apple has quietly included handwriting recognition for Chinese (Traditional and Simplified) into the latest iPhone Firmware 2.0 beta. When you select Chinese input, you are given the option to use handwriting recognition allowing you to draw characters on the screen with your finger. As you write the character, four possibilities appear on the right side of the screen.

Wretch.cc (Chinese) details many screenshots of the new feature, and MacRumors has been able to independently verify that this does exist in the latest iPhone firmware beta available to registered iPhone developers. There is no support for English at this time. 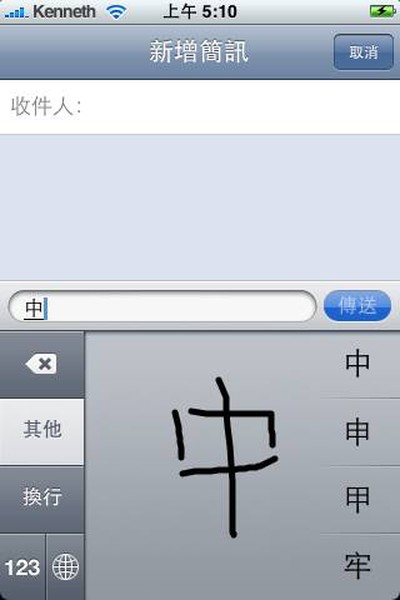 Apple was one of the pioneers in handwriting recognition technology with their Newton Personal Digital Assistant. While the original Newton contained a 3rd party handwriting engine that generated some early bad press, Apple later deployed their own much improved handwriting technology known as "Rosetta". Rosetta technology later found its way into Mac OS X under the name "Inkwell".

Apple recently started hiring for a new Handwriting Recognition Engineer, so it appears Apple is reinvesting in this technology.