Wednesday April 16, 2008 9:43 PM PDT by Arnold Kim
Getting fake Cease and Desist Letters. Confirmed hoax
A MacRumors reader ran across a very unusual .Mac web page yesterday and was kind enough to forward it on. The page contained promotional images for Apple products, including a couple that are not yet shipping products. Specifically, an aluminum MacBook with multitouch and an iMac-like MacBook Pro design were shown: 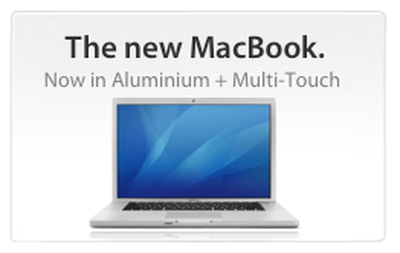 Typically, we might dismiss such images as some of the many speculative fan-made mockups floating around, but the web page also listed a valid "@apple.com" iTunes Store account and password. Due to the live account information listed, we are not linking directly to the site, but have provided some screenshots below.

The site also revealed a number of other details, including teasers for iTunes 8, a 32GB iPhone, and a WWDC launch date (June 10th). The amount of information included at this early date, especially on a publicly accessible site, makes it difficult to believe. However, the live @apple.com iTunes account is difficult to ignore.

Update: The images appear identical to previous user-submitted mockups making these unlikely to be legitimate, however, they were still inexplicably associated with an Apple-owned account.

Update 2: Apparently, you can sign up for any Apple ID you want if no one else has picked it (stevenjobs@apple.com, sergeynpage@google.com, etc...) and they don't require you to have control of that email.

Wednesday November 30, 2022 12:43 pm PST by Juli Clover
Twitter CEO Elon Musk today met with Apple CEO Tim Cook at the Apple Park campus in Cupertino, California, according to a tweet shared by Musk this afternoon. Musk thanked Cook for taking him around Apple's headquarters, with no mention of what the two might have discussed. The meeting comes just after Musk on Monday claimed that Apple has "mostly stopped" offering ads on Twitter, and that...
Read Full Article • 341 comments