The Inquirer posts what it claims is more evidence that Apple is planning to adopt Intel's Moorestown architecture for a future iPhone model.

DigiTimes was first to make such a claim in October 2007 citing the usual "OEM sources." The Inquirer now posts a slide from Intel's CeBIT presentation which depicts the iPhone as a Moorestown smartphone. 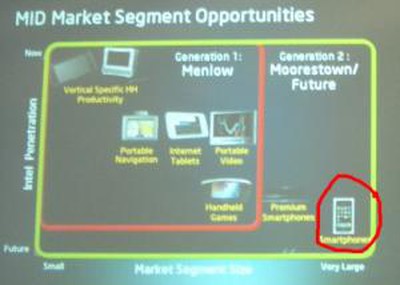 Image courtesy of The Inquirer

Of course, the use of the iPhone to represent smartphones may not mean anything, as the iPhone is currently one of the hottest-selling smartphones on the market. However the image does corroborate DigiTimes' previous claims.

The Moorestown platform is the successor to the Menlow platform due later this year. Both are based around the Intel Atom processor, which Intel expects to launch a new class of mobile internet devices. Moorestown is not expected until 2009, so its use would likely be for the third or later iteration of the iPhone, but could also find its way into the rumored Apple mini-tablet.

Update: Recent analysis by Anandtech suggests that Intel's Atom's processors (and therefore Moorestown) may not be headed to the iPhone until at least 2010.

Tuesday July 7, 2020 6:49 pm PDT by MacRumors Staff
Apple is planning on launching the iPhone 12 this fall which is rumored to be coming in 3 different sizes: 5.4", 6.1" and 6.7". The middle size (6.1") matches up with the currently shipping iPhone 11, but the other two sizes will be entirely new. Over the weekend, there was some excitement about how well the new 5.4" iPhone 12 compares to the original iPhone SE. Those who have been hoping...
Read Full Article • 137 comments

Monday July 6, 2020 6:55 am PDT by Eric Slivka
Amid rumors and hints of a forthcoming update for the iMac, supplies of Apple's current 27-inch iMac continue to dwindle with mid- and high-end stock configurations now seeing shipping estimates pushed back into September. The 27-inch iMac has seen tight supplies and extended shipping estimates for months now, but the situation has been gradually worsening to the point where new buyers can...
Read Full Article • 102 comments

Wednesday July 8, 2020 9:35 am PDT by Joe Rossignol
Despite multiple reports indicating that Apple will not include EarPods or a wall charger with iPhone 12 models this year, one analyst believes that pricing will still increase slightly compared to the iPhone 11 lineup. In a research note provided to MacRumors, analyst Jeff Pu forecasted that iPhone 12 pricing will start at $749 for a new 5.4-inch model, an increase of $50 over the base...
Read Full Article • 247 comments