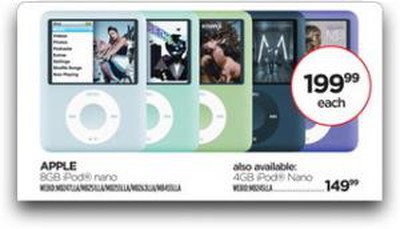 Apple's current line of iPod nanos come in silver, blue, green, black, pink, and (PRODUCT) RED. The obvious suggestion is that Apple is set to release a purple iPod nano. However, note that mousing over the photo reveals the current iPod nano lineup, increasing the possibility that the advert simply has profound mistakes. The photo also appears extremely similar to Apple's stock gallery imagery.

Tuesday May 11, 2021 5:06 am PDT by Hartley Charlton
Apple's next MacBook Air will feature a completely new design and come in a range of colors like the 24-inch iMac, according to leaker Jon Prosser, who has now released supposedly accurate renders of the new machines based on leaked images. In a new video uploaded to YouTube channel Front Page Tech, Prosser elaborated on his previous prediction that Apple's next-generation MacBook Air models ...
Read Full Article • 65 comments