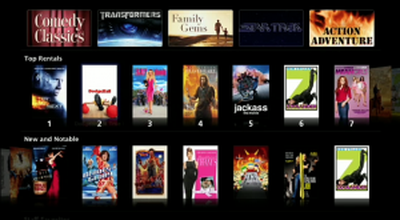 Apple has released the Take 2 update for the Apple TV today. The software update is available for download from your Apple TV itself. The free software update allows Apple TV owners to rent movies without the use of a computer in standard and high definition formats. Library titles cost $2.99 and new releases are $3.99. High definition versions add $1 to the price of rental. Movies can be kept for 30 days, but expire within 24 hours of playback.

Apple provides a guided tour of the new features of Apple TV.

Now that some readers have installed the latest Apple TV update, here are some interesting notes plucked from the discussion thread.