Virtualization competitors Parallels and VMWare were taking opposite sides of the South Hall at Macworld to show off Mac OS X Server running in a virtualized environment on Apple hardware (made possible by changes to Mac OS 10.5's EULA for Leopard Server).

For its part, Parallels showed off a new product, currently in beta, called Parallels Server (previously announced). Parallels is targeting Parallels Server for users of server hardware, as the software contains hooks that allow more in-depth monitoring of the hardware that the desktop edition does not allow. In beta, the software currently supports up to 2-way SMP for virtual machines, although they state that the shipping version will support 4-way SMP. This SMP support will eventually find its way into their Desktop product. Parallels received a Best of Show award for Parallels Server from Macworld. 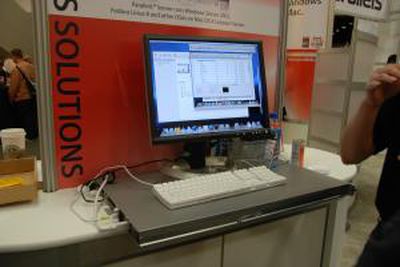 Parallels Server Display, running on a previous generation Xserve
VMWare has also been busy working to support Mac OS X 10.5 Leopard Server in a virtualized environment. At Macworld, they demoed a technology preview which showed VMWare running multiple server operating systems with the usual hardware support. Sound and accelerated video were not working, however, and VMWare could not commit whether such support would be included in the final shipping version. As a technology preview, no product was announced and no ship date yet available.

Sunday August 7, 2022 6:13 am PDT by Sami Fathi
Apple has "started to record" its virtual September event, where it's expected to announce the upcoming iPhone 14 lineup, the Apple Watch Series 8, and a new "rugged" Apple Watch model, according to Bloomberg's Mark Gurman. Writing in his latest Power On newsletter, Gurman says the event, which is expected to take place in the early part of September, is already under production, implying...
Read Full Article • 127 comments

Monday August 8, 2022 10:43 am PDT by Juli Clover
With the fifth beta of iOS 16, Apple has updated the battery icon on iPhones with Face ID to display the specific battery percentage rather than just a visual representation of battery level. The new battery indicator is available on iPhone 12 and iPhone 13 models, with the exception of the 5.4-inch iPhone 12/13 mini. It is also available on the iPhone X and the iPhone XS. Battery percent...
Read Full Article • 326 comments

Monday August 8, 2022 4:33 am PDT by Tim Hardwick
The camera bump on the upcoming iPhone 14 Pro Max is expected to be the largest rear lens housing Apple has ever installed on its flagship smartphones, and a new photo offers a rare glimpse at just how prominent it is compared to Apple's predecessor device. iPhone 14 Pro Max dummy (left) vs iPhone 13 Pro Max All iPhone 14 models are expected to see upgrades to the Ultra Wide camera on the...
Read Full Article • 126 comments