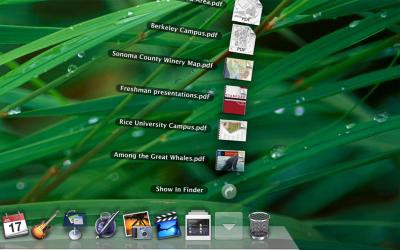 Appleinsider provides another look at the most recent developer's build of Leopard with a focus on the history and improvements in the Finder's Dock.

It's therefore notable that Leopard sports an entirely new Dock appearance, which now presents its icons as three dimensional objects sitting on a translucent glass shelf, rather than flat objects stuck in a translucent ribbon of icon flypaper. Dock icons now cast a reflection on the Dock (as do other windows on the screen, and even the background image), as well as casting a shadow behind them. The combination of the reflection and the shadow contribute to their dimensional appearance.

Leopard's new dock functionality is perhaps most efficiently explained in Apple's demo video (Quicktime) of the Dock and Finder. Further description and photos available at at Apple.

Mac OS X Leopard is reportedly approaching Gold Master status. According to the most recent checks, Apple had 11 high priority bugs left. Apple has previously announced that they intend to ship Leopard in October.

Tuesday June 2, 2020 1:31 am PDT by Tim Hardwick
Apple Music has cancelled its Beats 1 radio schedule for Blackout Tuesday and is suggesting that listeners tune in to a radio stream celebrating the best in black music. Blackout Tuesday is a campaign organized by the music industry to support Black Lives Matter after Minneapolis citizen George Floyd was killed by police in the course of his arrest. On launching Apple Music, many users...
Read Full Article • 427 comments

Thursday June 4, 2020 10:07 am PDT by Juli Clover
We still have a few months to go before Apple unveils the iPhone 12, but rumors about the iPhone 13, coming in fall 2021, are already circulating. Japanese site Mac Otakara today shared a rough 3D printed mockup of a 5.5-inch iPhone said to be coming in 2021, which is from "Alibaba sources." The model may be built on leaked specifications and rumors, but where the info comes from is unclear. ...
Read Full Article • 107 comments