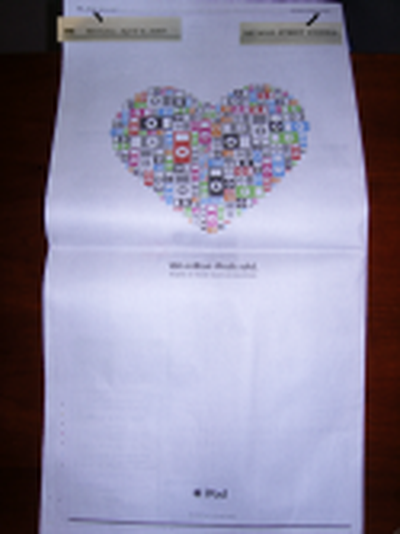 At this historic milestone, we want to thank music lovers everywhere for making iPod such an incredible success, said Steve Jobs, Apples CEO. iPod has helped millions of people around the world rekindle their passion for music, and were thrilled to be a part of that.

The iPod has also sparked an unprecedented ecosystem of over 4,000 accessories made specifically for the iPod that range from fashionable cases to speaker systems, and more than 70 percent of 2007-model US automobiles currently offer iPod connectivity.

I take my running shoes and my iPod with me everywhere, said Lance Armstrong, seven-time Tour de France champion. I listen to music when I run. Having my music with me is really motivating.

Update: sminman posts a photo of a full page advertisement that Apple took out in today's Wall Street Journal celebrating the 100,000,000 iPod sales.