Tuesday March 5, 2019 1:47 pm PST by Juli Clover
Apple has objected to an apple logo trademark that Norway's Fremskrittspartiet or Progress Party filed for back in November, according to the Norwegian Patent Office. The image in question features a red apple with a stem and a green leaf that also has a white "F" on the front, an icon used by the Fremskrittspartiet. In an objection letter provided to Norway's Patent Office, Apple says that the trademark that the Fremskrittspartiet has registered "resembles" the "very well-known" trademarked Apple logo and is likely to be confused with Apple's prior trademarks. The Fremskrittspartiet has applied to use the trademark for computer software, digital media, stationary and other paper products, household items, textiles like flags, clothing and headgear, buttons, and games and toys. It's not yet clear how this will play out, but Apple plans to provide additional documentation to support its case in the future. Apple is asking the Norwegian Patent Office to repeal the Fremskrittspartiet's trademark registration. (Thanks, Sander!)
Read Full Article • 77 comments 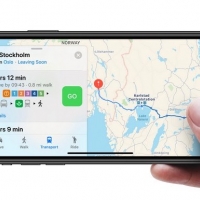 Monday January 21, 2019 12:24 am PST by Tim Hardwick
Apple Maps today gained comprehensive transit directions for Denmark, Sweden, Norway and Finland, in the largest single combined update to its European coverage thus far. The coverage includes train, tram, and bus routes in the capital cities of each country, including Oslo, Stockholm, Copenhagen, and Helsinki, as well as funicular connections where available and transit links across borders. Apple has yet to update its official list of locations for which Maps offers Transit data, but the information is already live across Europe. Google Maps has supported transit directions for several years now, but ‌Apple Maps‌ has been steadily catching up with detailed routing information in recent years. Transit coverage began in 2015 with an initial rollout in Baltimore, Berlin, Boston, Chicago, London, Los Angeles, Mexico City, New York, Philadelphia, San Francisco, Sydney, Toronto, and China. Since then, Apple has expanded the feature to many other regions around the world. (Thanks, Bernd and Noah!)
Read Full Article • 38 comments

Apple Pay Debuts in Norway With Nordea and Santander

Wednesday June 20, 2018 12:07 am PDT by Eric Slivka
Just a day after launching in Poland, Apple Pay has debuted in Norway, bringing the total number of supported countries and regions to 24 by our count. Apple has updated its list of participating banks to note that Nordea and Santander Consumer Finance are currently supported in Norway. Apple CEO Tim Cook announced on Apple's earnings conference call last month that Apple Pay would be launching in Ukraine, Poland, and Norway in the near future, and with the addition of Norway today those promises have been fulfilled. Apple Pay launched in Ukraine just over a month ago. (Thanks, TrulsZK!)
Read Full Article • 32 comments

Tuesday November 29, 2016 9:41 am PST by Joe Rossignol
Apple has enabled carrier billing in Belgium and Norway, expanding upon the feature's existing availability in Germany, Japan, Russia, Switzerland, Taiwan, Saudi Arabia, and the United Arab Emirates. The feature is limited to select carriers in each country — share if yours is supported in the comments. The payment method enables customers to pay for iTunes content, App Store apps, iBooks, and Apple Music subscriptions without needing a credit or debit card, or even a bank account. Instead, purchases are added to a customer's mobile phone bill and paid off at the end of the month. Apple has a support document explaining how to set up carrier billing on iPhone, iPad, or iPod touch and Mac or
Read Full Article • 13 comments

Norway to Force Accused Criminal to Unlock His Phone via Fingerprint

Tuesday February 9, 2016 8:30 am PST by Joe Rossignol
Norwegian police will force a 27-year-old man accused of drug possession to unlock his mobile phone via fingerprint, according to local website Bergensavisen [Google Translate]. The police believe the confiscated smartphone may contain evidence about where he obtained the illegal substance. The man, who reportedly admitted he was culpable, has refused to unlock his phone for police since being charged, but the Nordhordland District Court's recent verdict allows Norwegian police to force the accused's thumb on to his fingerprint-secured phone. Local police will also analyze his phone call and data history. The brand of the phone is not disclosed in the report, but if it is an iPhone, it is not clear if Norwegian police are aware that Touch ID requires a passcode as supplemental verification after 48 hours of disuse, a restart, or three failed fingerprint entry attempts. The accused was arrested on January 25, so it may be impossible for authorities to unlock an iPhone with Touch ID without taking additional measures. In the U.S., a Virginia court ruled that fingerprints, unlike passwords and passcodes, are not protected by the Fifth Amendment. In his ruling, Judge Steven C. Frucci opined that "giving police a fingerprint is akin to providing a DNA or handwriting sample or an actual key," which is permitted under federal law. Correction: The source article does not explicitly state that the device in question is an iPhone, and this article has been updated to reflect that. Note: Due to the political nature of the discussion regarding this topic, the
Read Full Article • 114 comments

Friday October 16, 2015 10:24 am PDT by Joe Rossignol
Just weeks before the Apple TV 4 is expected to be released worldwide, select Apple Authorized Resellers in Europe have begun accepting pre-orders for the new set-top box. The Apple TV 4 is officially slated to launch in late October, but the majority of orders are unlikely to be fulfilled until November. Electronics retailer Elgiganten, equivalent to Best Buy in the Nordic Region, is accepting Apple TV 4 pre-orders in Denmark and Norway with expected delivery in November. The 32GB and 64GB models are listed for 1,399 and 1,849 Danish kroner and 1,749 and 2,299 Norwegian kroner respectively. German electronics retailer Cyberport has also listed the Apple TV 4 and iPad Pro for pre-order on its website. The authorized reseller lists the 32GB and 64GB Apple TV 4 for €179 and €239 respectively, which could be indicative of broader European pricing, although prices in other countries will likely vary depending on local taxes. iPad Pro prices range from €899 to €1,229, compared to between $799 and $1,079 in the United States. Cyberport advertises that the Apple TV 4 will be available from November 5, and lists the iPad Pro as not yet available. Apple has not provided a specific release date for either product beyond late October for the Apple TV 4 and November for the iPad Pro. (Thanks, Rasmus and Maxime!)
Read Full Article • 137 comments

Wednesday October 14, 2015 8:53 pm PDT by Joe Rossignol
Apple has raised its prices for the MacBook, MacBook Air, MacBook Pro, Mac mini and Mac Pro this week in Australia, Brazil, New Zealand, Norway, Malaysia, Mexico, Thailand and Turkey as the values of foreign currencies continue to fluctuate against the U.S. dollar. MacBook Air prices in New Zealand, for example, ranged between NZ$1,399.00 and NZ$1,799.00 for stock configurations prior to the price increase, but the lineup is now priced between NZ$1,599.00 and NZ$2,199.00. Similarly, the base model Mac mini now starts at NZ$899, up from NZ$749, while the base model Mac Pro rose from NZ$4,499.00 to NZ$5,699.00. The 12-inch MacBook is now priced from NZ$2,399, a $400 increase over the original NZ$1,999 price. The price increases were consistent on the Apple Online Store in the other affected countries. In Brazil, for instance, the MacBook Air now costs between R$ 8.499,00 and R$ 11.499,00, up from between R$ 5.899,00 and R$ 7.699,00. Retina MacBook Pro prices now start at kr 14 990,00 in Norway, as another example, an increase over the former kr 12 590,00 price for the entry-level configuration. In Malaysia, the Retina MacBook Pro is also now more expensive, at RM 5,899.00 and up. Apple reports its quarterly earnings in U.S. dollars, and routinely adjusts its prices in foreign countries due to currency exchange rates that are beyond its control. Australia, Canada and Europe have faced similar price increases this year. Update: MacRumors has confirmed several tips from readers about similar price increases on Macs and some other products in Australia, Mexi
Read Full Article • 234 comments