Review: iBoy is a Must-Have Desk Toy for iPod Fans

Designer Philip Lee, known for his line of Classicbot toys modeled after Apple products, earlier this year came out with his latest figurine, the iBoy. 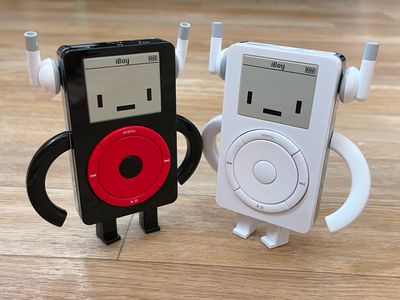 The palm-sized iBoy is an homage to Apple's iPod Classic, first released in 2001. Design wise, the iBoy is a cross between an iPod and a robot, and it makes for a fun desktop toy or shelf decoration.

iBoy's body looks similar to a classic iPod, with a fake screen that houses a robot face and a functional click wheel with buttons that can be pressed. The wheel in the middle turns just like on an iPod, and all four buttons around the wheel can be pressed in, as can the middle button.

The buttons have a satisfying click that will remind iPod fans of their classic music players, and the weight is also similar to an original iPod. iBoy's buttons were my favorite part because in addition to being a cute desktop accessory, iBoy is also fun to fidget with.

None of iBoy's components are functional electronics, but the detail of the design is impressive. The standard iBoy is in white just like a classic iPod, but there's also a special edition "2U" version in black and red (modeled after the U2 iPod) that makes for striking desktop decor

iBoy's front is made from white or black plastic much like the iPod, while the back is made from chrome. The chrome can be prone to scratches and scuffs, especially where the iBoy logo is located, so this is a figurine you'll want to take care of. With the chrome body, there are headphone antennae, arms, and legs, all of which give the iBoy a robot-like look.

These appendages attach to the iBoy using magnets, and there's a bit of setup involved. iBoy's magnetic parts have a small plastic covering to prevent iBoy from scratching during shipment, and these little plastic coverings need to be removed. It's not difficult, but it takes a bit of time.

The magnets that adhere the limbs to iBoy are not strong even with the adhesive removed, so it's best to take care when moving iBoy to make sure not to accidentally lose a limb. The fear of losing parts due to the magnetic attachment is the biggest concern I have about iBoy because it feels like I could knock the toy off a desk and easily misplace a limb.

The magnetic parts are strong enough to stay in place when iBoy is stationary, though, and the iBoy can also stand up on the magnetic legs. Because the arms and legs attach magnetically, they can be arranged in different ways if desired. This mostly applies to the arms, which can be raised or lowered in different positions, and the headphones, which can be positioned up or down. The legs can be positioned under iBoy or placed at the front to make it look like iBoy is sitting.

iBoy's arms and legs can be removed from iBoy entirely so it can be displayed in MP3 player mode with the headphones attached through an included headphones cable that attaches to the small headphone jack at the top of the toy. When in MP3 player mode, iBoy's extra parts can be stored in a bag that comes with the toy.

Apple fans seeking Apple-related desk decor will love the iBoy, as will those who have a special fondness for Apple's original MP3 player. iBoy's iPod inspiration is unmistakable, and it looks great on a shelf. With the clickable buttons, iBoy is the most interactive of the Classicbot line of toys, and it also makes a fun desktop distraction.

If you're looking for a unique gift for an Apple enthusiast, you won't go wrong with iBoy. Philip Lee's Classicbot company also makes a whole range of other classic Mac products that are worth checking out, but I think iBoy is his best yet.

iBoy can be purchased from the Classicbot website for $38 with regular and special edition models available.

Note: Classicbot provided MacRumors with the iBoys for the purpose of this review. No other compensation was received.

iamasmith
Is there a Geordie version that calls the question of it's existance.. possibly called 'why iBoy'
Score: 7 Votes (Like | Disagree)

Apple_Robert
It looks fair. I certainly wouldn’t pay $38 dollars for it.
Score: 7 Votes (Like | Disagree)

Porco
Imagine if Apple sent the '2U' version as a gift to absolutely everyone whether they want it or not... it just arrives and then you have to deal with it... ;) ...that would be nice of them, right? ;)
Score: 5 Votes (Like | Disagree)
Read All Comments

21 hours ago by Joe Rossignol