GRID Studio is known for offering wall art showcasing vintage devices that are an important part of Apple's history. Each device is disassembled and the components are artistically displayed in a frame that can be hung on the wall of any Apple fan. 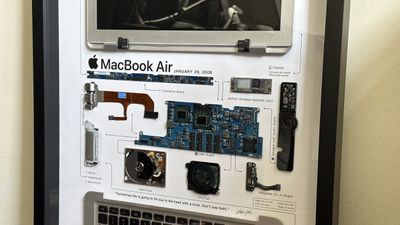 The first-generation MacBook Air is GRID's first ever disassembled Mac, selling for $699. Prices for GRID's pieces start at $40 for an A-series chip, and the ‌MacBook Air‌ is its most costly frame, but there are all kinds of options priced at around the $200 mark.

The first thing to be aware of with the GRID Studio ‌MacBook Air‌ is just how large it is, with the frame measuring in at 29.9- by 18.5-inches. While the device itself weighs just 3.0 lb (1.36 kg), the large wooden frame adds a considerable amount of weight. The packing parcel is, of course, even larger and heavier, so buyers should be prepared for this upon purchase.

GRID's frames come well-packaged to protect them in transit and are enclosed in thick black paper, finished with a ribbon and a wax seal to make the iconic device within feel truly special. While GRID's products come impressively packaged, I'd warn customers about getting small paper cuts from the packaging – something that has happened to me repeatedly when opening GRID products.

The black wooden frames GRID uses contrast well with the white card upon which the device components are glued and go relatively easily with most interior designs. Unfortunately, the black frames seem to immediately attract quite a lot of fingerprints and dust, but they are mostly easy enough to wipe away with a damp cloth.

The frame contains a pane of transparent plastic rather than glass, and it seems to be thinner than that used in the smaller GRID frames. I would have probably preferred glass, but this would add even more weight. To remove the film protecting the clear plastic, you need to open the frame from behind, which is easy to accomplish, just like any other picture frame. This also enables you to wipe away any excess fingerprints or dust from inside the frame or the components.

The weight of the ‌MacBook Air‌ seems to put a lot of stress on the white card backboard and causes it to flex quite a bit, so care should be taken when opening it. The device's fan had detached inside my frame, but it was easy enough to slot back in place when I opened it up.

The first-generation ‌MacBook Air‌ redefined what could be expected from a laptop's design, and cemented principles that continue to be seen on Apple's laptops today. Steve Jobs introduced the ‌MacBook Air‌ at the 2008 Macworld conference, pulling the device out of a manilla envelope to emphasize its thin design. At the time, it was promoted as the world's thinnest notebook at just 1.9cm thick.

It featured an Intel Merom CPU and GMA GPU, an anti-glare LED backlit display, a full-size Magic Keyboard, and a multi-touch trackpad. It was also Apple's first notebook since the PowerBook 2400c without an optical drive, and the first Mac to be available with an SSD. As such, it is a particularly important piece for Apple enthusiasts with iconic status. The device is now obsolete, so GRID is able to give it a new lease of life by displaying its components in a frame.

Like GRID's other displays, the disassembled ‌MacBook Air‌'s components are methodically laid out inside the frame with printed details. Annotations explain what each of the components are, a bit of the device's history, and provide a quote from Steve Jobs.

The device's components are well organized inside the frame, showing off the main board, hard drive, fan, top and bottom case, and more. I would have preferred further disassembly, such as of the trackpad, keyboard, and display, but I appreciate that there is limited space, even inside a frame this big, and things are still displayed in a visually engaging way.

While the product is costly relative to GRID's other frames at $699, it is currently available for $599 discount for a limited time, and it's worth bearing in mind that the ‌MacBook Air‌ model in the frame originally sold for $1,799.

The device does have some slight wear and tear in places due to its age and because it is used, and I found this most noticeable on the keyboard. Nevertheless, it is clear that GRID has selected devices with only minimal wear, and it seems to be very clean and more than adequate for display.

All in all, the first-generation ‌MacBook Air‌ is a very good addition to GRID's product lineup, elevating the design of one of the most iconic Apple devices. With attention to detail and plenty of nice touches to make the device feel special, GRID's frames are the perfect items for any Apple fan looking to bring some of the company's most well-known designs into their home in a thoughtful way.

GRID Studio's products are available from its website, gridstudio.cc, and the first-generation ‌MacBook Air‌ frame is currently $100 off.

MrKennedy
Lol these shrines to outdated tech crack me up. The asking price is out of control.
Score: 6 Votes (Like | Disagree)

ndouglas
Out of all the odd front-page ads masquerading as product reviews, this has got to be one of the weirdest to me, on so many levels: 1. to think someone would make this product, 2. That anyone buys this stuff, 3. That MR puts this much time and detail into a product description …
Score: 5 Votes (Like | Disagree)

Agent OrangeZ
Apple laptops hold their value so well that even a non-functioning, disassembled one is going for $700!
Score: 5 Votes (Like | Disagree)

TheYayAreaLiving ?
It looks very nice but the price is too steep :(
Score: 5 Votes (Like | Disagree)

Kobayagi
that price... lol. Get a broken Air for like 50, dissemble it, print some basic specs from Wiki, paste everything onto a board, frame it = profit.
Score: 5 Votes (Like | Disagree)
Read All Comments

2 days ago by Eric Slivka