If you own a Mac powered by Apple silicon, you can download and install iOS and iPadOS apps from the Mac App Store in macOS Big Sur. But how do you uninstall them? Keep reading to learn how. 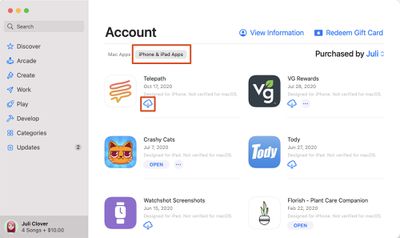 Apple's M1 Macs, which are the first to be powered by an Apple-designed Arm-based chip, are able to run iOS and iPadOS apps because of the common architecture between the different operating systems.

That means ‌M1‌ Mac owners can download and install iOS apps from the ‌Mac App Store‌ just as if they were Mac apps, and Apple even includes preferences for Touch Alternatives that allow users to set keyboard commands for iPhone/iPad touch input alternatives.

However, many users have found themselves wondering how iOS apps are properly uninstalled on an Apple silicon-based Mac.

The question comes up because many users have tried dragging the app icon to the Trash in the usual way, only to find that the app binary gets deleted yet much of the app's related content remains on the disk, usually in the ~/Library/Containers folder, needlessly taking up storage.

Fortunately, there is a surefire way to ensure that all of the data associated with an iOS app is removed when you uninstall it, but it does require the use of a couple of Terminal commands, so make sure you're comfortable working in a command prompt window before you attempt the following.

How to Uninstall iOS Apps on an M1 Mac

The iOS app and all data associated with it should now be removed from your Mac.

Tuesday April 27, 2021 5:21 pm PDT by Tim Hardwick
In iOS 14.5, Apple has made some notable changes to its native Podcasts app. Some of these changes reflect the fact that Apple announced an optional paid podcast subscription service (beginning May 2021), while others are interface improvements to make it easier to find, follow, and listen to new episodes. One example of these changes is the new Smart play button, which is designed to help...
Read Full Article • 36 comments

iPadOS 14.5: How to Search for Emoji on iPad

Thursday April 29, 2021 4:17 pm PDT by Tim Hardwick
Apple introduced a much-requested emoji search feature in iOS 14, meaning iPhone users have been able to search for their favorite emoji for a while now. With the release of iPadOS 14.5, Apple has finally brought parity to its tablet devices by allowing iPad users to do the same thing. Here's how the new emoji search works. Before you follow the steps below, make sure you've enabled emoji in ...
Read Full Article

How to Erase an M1 Mac

Tuesday March 2, 2021 11:25 am PST by Tim Hardwick
This article explains how to erase (or format) the built-in startup disk of a Mac with Apple silicon. Note that erasing your Mac permanently deletes all files on it, so follow the backup advice carefully. If you plan to give away, sell, or trade in a Mac, erasing your Mac should be the final step. First, Back Up Your Data Before you do anything, you should back up the files on your Mac. You ...
Read Full Article

How to Clear Cookies in Firefox on Mac and iOS

Monday April 19, 2021 11:24 am PDT by Tim Hardwick
Whenever you browse the web in Firefox, the browser stores website data including cookies so that it doesn't have to do so again each time you revisit a site. In theory this should speed up your browsing experience, but there are some scenarios where you might want to clear the cache and start anew. Keep reading to learn how it's done on Mac, iPhone, and iPad. There are a couple of...
Read Full Article

How to Delete Downloaded Books and Audiobooks on iPhone and iPad

Thursday April 8, 2021 4:54 pm PDT by Tim Hardwick
If you've downloaded books, audiobooks, or PDFs to the Books app on your iPhone or iPad, it's worth going through them every once in a while. You may find that some of them no longer need to be there, in which case they're just taking up space on your device. The following steps show you how to delete unecessary items from the Books app, which should help free up some valuable storage. Laun...
Read Full Article