With the new Apple TV 4K now in customers' hands, some users are reporting issues when trying to control video with the redesigned Siri Remote. 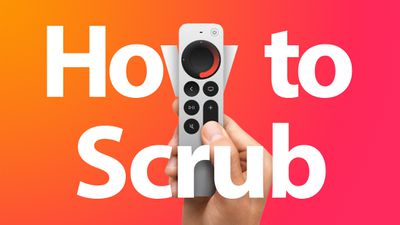 Specifically, some users are complaining that using the circular gesture on the new clickpad ring to fast-forward or rewind paused video isn't working as expected. Rather than scrubbing through video continually in the direction of the gesture, the video scrubs back and forth in opposite directions.

From what we've been able to work out, the problem seems to relate to a subtle additional gesture that users are missing out, either because it isn't very intuitive or Apple doesn't demonstrate it particularly well in the marketing material.

Try following these steps to get it working. We've italicized the crucial gesture that users appear to be omitting.

You should find this method works with Apple's own apps, but we've found inconsistencies in its functioning with third-party apps, especially those that don't use Apple's native playback UI. For instance, it worked for us in Netflix, but the Disney+ app had persistent issues responding to the circular gesture.

Anyone else having weird scrolling behavior with the new #AppleTV4K and Siri Remote? When I try to scroll on the new clickwheel it keeps scrolling back and forth. Happens on several apps like #DisneyPlus and #Netflix apps. Did you also see this during your review @Andrew_OSU ? pic.twitter.com/VfIOzQNuOP — David Kurz 🦠Durchhalten🦠 (@kurze_info) May 23, 2021

It could be that some third-party apps need updating before they recognize the new clickpad ring on the second-generation ‌Siri‌ Remote, so hopefully any niggles will be smoothed out soon.
Related Roundup: Apple TV
Tag: Siri Remote
Buyer's Guide: Apple TV (Neutral)
Related Forum: Apple TV and Home Theater
156 comments

femike
Is the Apple TV team so small that they didn't have time or care to test it out? They had 6 years to update this remote.
Score: 47 Votes (Like | Disagree)

omglolbbq
Apple need to enforce the use of standard UI components the same way they do in CarPlay so that features work consistently across the system and the user doesn’t have to learn ten different interfaces.
Score: 24 Votes (Like | Disagree)

Shasterball
The redesigned remote is 90% of the reason people are buying this thing. Apple appreciated this as they already sell the 2nd gen remote as a standalone. After all these years, and knowing the main desire to upgrade, why is the design still awkward?
Score: 19 Votes (Like | Disagree)

I miss being able to jump forward/back 10 seconds at a time by clicking on the right/left edge of the old remote. With the new remote, the video pauses and waits for me to scrub... scrubbing is less precise and requires more of my focus.

Use the left and right buttons for that; same functionality as the previous remote's touchscreen-edges.
Score: 16 Votes (Like | Disagree)

and everyone was so excited about this new remote ... hmmm ...

People will never be happy no matter what you do
Score: 11 Votes (Like | Disagree)

joediianni
Honestly… Third day into all new Apple TV’s in the house. I miss the old remote. The old gesture section was more like an extension of the iPhone and felt natural. This new one is large, clunky, button driven, I don’t know… Feels like it went back in time so far.
Score: 11 Votes (Like | Disagree)
Read All Comments

How to Remove the App Library From Your iPad's Dock

Monday January 24, 2022 12:00 pm PST by Tim Hardwick
Apple includes an App Library feature in iOS and iPadOS that shows you all of the apps that are installed on your iPhone or iPad in one place, both in an icon view organized into smart categories and in an alphabetical list. Since all of the apps are listed in the App Library, app icons and Home Screen pages can be hidden for a cleaner look. On iPad, Apple adds an App Library icon to the...
Read Full Article

5 hours ago by Juli Clover