How to Use Spotify With HomePod Through AirPlay

Apple's new HomePod smart speaker is designed primarily for Apple devices, and it's heavily tied to the Apple ecosystem. Natively, you can only stream music on the HomePod through an Apple Music subscription, iTunes purchases, or iTunes Match content uploaded to iCloud Music Library.

It might sound like you're out of luck if you subscribe to a third-party music service like Spotify, Pandora, Amazon Prime Music, Google Play Music, Tidal, or another option, but it's not impossible -- you can still play content from these services to HomePod, you'll just need to use AirPlay to do it. 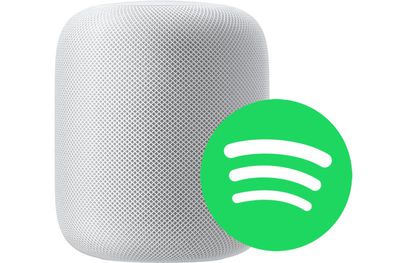 With most music apps, you can start up a song and then choose a device to play to right from within the app. These instructions will be specific to Spotify.

Here's an alternative method that works with Spotify and all other music apps:

It will take a few seconds for the iPhone or iPad to connect to HomePod, but once it's connected, your music will be streamed to HomePod from your iPhone.

You generally need an Apple device to stream music to the HomePod because it requires AirPlay functionality, but some HTC phones support AirPlay, and there are unofficial third-party Android apps that work with AirPlay, so these devices may also work with the HomePod. You can't, however, connect devices to the HomePod over a Bluetooth connection.

When streaming music to HomePod through AirPlay, you're not going to have full Siri support, but you can use Siri to play/pause music, change the volume, and change music tracks.

I'll stick with my Echo and Sonos.

I'll stick with my Echo and Sonos.
Score: 7 Votes (Like | Disagree)

I'll stick with my Echo and Sonos.

bpp85
It’s amazing to see how fast technology has advanced that now we are like “omg I can’t activate my speaker by voice to play music through my app of choice so I have to use AirPlay :eek:“
Score: 4 Votes (Like | Disagree)

Just get Apple Music! You own an iPhone!

Specifically
- Music discovery sucks compared to Spotify
- Lack of year-end playlists (your most listened tracks etc.) and other fun features...sucks
- UI sucks
- Lack of free tier sucks for some people
- In conclusion, Apple Music sucks and the only reason to get it instead of Spotify is if you’re desperate to be as far up Apple’s #*@# as possible.
Score: 4 Votes (Like | Disagree)

GadgetBen
Just get Apple Music! You own an iPhone!
Score: 4 Votes (Like | Disagree)
Read All Comments

Friday November 25, 2022 2:58 am PST by Sami Fathi
An Apple engineer has addressed the lack of lossless audio support in the second-generation AirPods Pro in a new interview. Current Bluetooth technology in the AirPods lineup means that Apple's audio products do not support Apple Music Lossless audio. Apple has previously hinted that it may develop its own codec and connectivity standard that builds on AirPlay and supports higher quality...
Read Full Article • 192 comments